Arapaho, a language spoken in the Plains Algonquian primarily on the Wind River Reservation and parts of western Oklahoma, is facing extinction.

Dr. Aldora White Eagle, CEO of the Northern Arapaho Tribe, says that a “series of genocides” is the root of the issue due to the history of colonization within Native American communities. 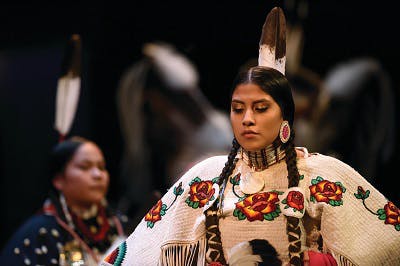 Josie Trosper in Shoshone regalia at the University of Wyoming.

From the late 1800s into the mid 1900s, Captain Richard Henry Pratt, known for saying “kill the Indians and save the man,” forced Native American children to attend the Carlisle Indian School as well as other boarding schools across the nation to “Americanize” them.

Children were taken away from their communities at the youngest age of ­have and were held at the boarding schools until they were 18. There, they were only allowed to speak English and were beaten for speaking any other language, says White Eagle.

“They thought that we were savages, that we didn’t have any way of life and the only way we were going to be successful was to colonize us,” White Eagle adds. “Once they did, it was cultural genocide.”

Upon the children’s return to their communities, their knowledge of languages such as Arapaho dissipated.

White Eagle says that the Northern Arapaho Tribe is now ­fighting to save what was lost.

“The Arapaho language de­fines who we are,” she says. “We have been gifted the Arapaho language by the creator. It is very sacred and it’s our way to talk to our creators. It should be used in every aspect of our lives, it’s very important in our ceremony, even in daily life.”

Through a partnership with the University of Wyoming (UW) and the Northern Arapaho Tribe, an immersion dual language school will be established for K-16 students.

Hinono’eitiit: The Bureau of Indian Education (BIE) St. Stephen’s Indian School Arapaho Language Immersion School aims to “revitalize, maintain and enhance Arapaho language and culture in a BIE school once dedicated to their extinction,” according to the school’s strategic plan.

The immersion school will begin with kindergarten-aged students and slowly add more grade levels as the years progress. 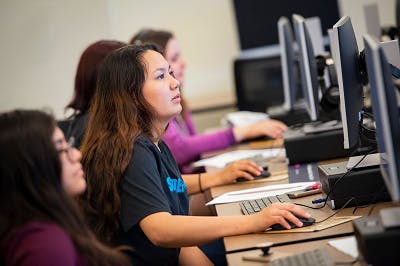 Upward Bound students at the University of Wyoming.

Within the classroom, there will be three adults including an eminent elder language and culture mentor who is a member of the Northern Arapaho Tribe, a Wyoming state-certi­fied classroom teacher and one novice student teacher.

The immersion school is currently in the planning stages, working to hire, train and teach certified instructors the Arapaho language.

Beyond the current three-year $166,000 St. Stephen’s Indian School grant awarded by the Bureau of Indian Education (BIE), the school’s objective is to develop long-term funding, according to their strategic plan.

Kindergartners who speak English as their first language will begin the program at the start of the 2020-2021 school year.

“Revitalization of the language and culture is the primary goal but we also want to show people that you can have a dual immersion program in which kids can acquire fluency in the Arapaho language and English language and are highly successful in regular school,” says Dr. Timothy Rush, professor emeritus of elementary education at UW.

There are also opportunities to learn the Arapaho language on the UW campus. Students can take classes through the university’s Native American and Indigenous Studies Program. The classes are immersion style using research projects and internships as tools of teaching.

An augmented reality app was also developed in order to reach the new generation of students. Using the app, students can practice their language skills first-hand by participating in various quests around campus, according to James Trosper, director of the High Plains American Indian Research Institute.

As part of their land-grant mission to serve the entire Wyoming community, UW also established other partnership programs with the Wind River Indian Reservation.

Rush says these partnerships are needed “to establish mutual respect and understanding between a culture that’s been dominant for a long time and a culture that has traditions and values that everybody should understand and practice.”

The various partnerships focus on research, recruitment and economic aid, which has caused an increase in Native American enrollment at UW.

The cost of attending college is often too high for Native American students. However, there are several scholarships available to Native American students to attend UW including the Northern Arapaho Endowment Fund Scholarship, awarded to those who have a commitment to serving the Arapaho tribe. The Chief Washakie Endowment is another scholarship that helps students tied to the Wind River Indian Reservation community pay for college.

UW also supports Native American students who are aspiring entrepreneurs. Students can participate in a business startup challenge — the student with the winning business idea is awarded a $25,000 prize.

For many Native American students, adjusting to university life can be difficult.

Trosper says that while most Americans and Europeans come from an individualistic society, Native American tribes have more of a collectivistic worldview.

Thus, UW established the Native American Education, Research and Cultural Center in 2017 to provide advising, resources and help with recruitment and retention of Native American students.

Additionally, UW created many research opportunities available to students on reservations including studying the effects of Shoshone ancestral foods on their health, culture and identity or the effects of gardening on an individual’s health, Trosper says.

Throughout history, the government signed treaties with Native American tribes to keep them in certain geographical regions. With a lack of resources in the new designated area, the government agreed to give Native Americans rations in exchange for their land, which created a “culture of dependency,” says Trosper.

“I think that was their intention because through that cultural dependency, they were able to control the tribes,” he adds. “So, if any of the young men went out and attacked settlers, then the government can come back and say, ‘Well, we are going to withhold your rations for this month.’ The whole tribe paid the price and put pressure on those young men not to attack the settlers. It was really a way of controlling the tribes.”

Trosper says that cultural dependency still exists today and he hopes these initiatives will change it.

“We really want to go back to the way that we were before when we were entrepreneurs and provide for ourselves,” he adds. “So, I think that process really begins with education and some of the other partnerships that the University of Wyoming is providing to the Wind River Reservation.”