Some Tribal Colleges Are Growing Amid the Pandemic

In the fall, a study of nearly 500 tribal college students – conducted by the American Indian Higher Education Consortium (AIHEC) – found that 91% of students knew someone who had COVID-19. About 69% of students said they were likely to pay a bill late in the next three months, and 42% had lost a job or got a pay cut.

And yet a handful of tribal colleges are actually growing during the pandemic. Eight schools had an uptick in first-time student enrollment.

That isn’t to say tribal colleges and universities overall aren’t facing dwindling numbers of incoming students, like the rest of the higher education sector. Over three quarters of tribal colleges lost entering students, with first-time student enrollment dropping by 26% on average.

That’s a “huge” decrease, said Katherine Cardell, research and policy associate at AIHEC. In addition to cancelled classes, “students are struggling to respond to the pandemic, lack of resources at home, including internet. There was a fear of leaving home, less daycare, they were uncertain about employment, some were put on furlough, a switch to online classes, homeschooling their children at the same time as they’re trying to do everything else, having at-risk family members and wanting to take care of them … Those were some of the reasons given for disrupted enrollment.” 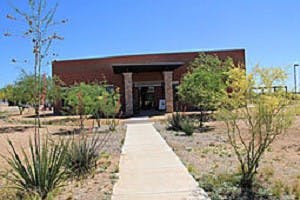 Still, the schools that are growing are growing by a lot. Of the tribal colleges with more students entering this fall, first-time student enrollment rose by an average of 45%.

“It was rather surprising to see that,” said Cardell, “and it was a good thing to see.”

At Tohono O’odham Community College in Arizona, for example, tuition was previously free specifically for students from the O’odham tribe to take O’odham language classes. But in the beginning of the school year, the institution expanded free tuition to all Native students, a policy that will continue through the summer and fall of this year.

“I don’t remember how many thousands of hits [the announcement] got on our Facebook page, but it became quite the thing,” said Dr. Paul Robertson, president of Tohono O’odham Community College. “It seems to have really stimulated a lot of interest.”

According to Robertson, the school had about 470 students before the pandemic, but now, it has over 700 enrolled, representing not just O’odham students but students from almost 60 other tribal nations.

“Feedback we’ve had from students and faculty are that it makes it really interesting to have people from a more diverse tribal constituency,” he said. It creates a new balancing act – trying to preserve the school’s O’odham practices while welcoming more Native students – but “it’s a good thing for discussion in class and so on. People come with a variety of experiences from these different tribal nations,” he added.

Similarly, Little Big Horn College in Montana provided full tuition and fee scholarships to all of its students for the year and waived all student debt in fall 2020.

In the midst of an economic downturn, the debt relief offered a “fresh start not only for the institution but also a fresh start for students,” said Little Big Horn College President Dr. David Yarlott Jr.

The move brought back some students who had been unable to re-enroll because of high outstanding debts. In the fall before COVID-19, the school had approximately 280 students, and this past fall, it welcomed over 400 students, Yarlott said.

Tribal college leaders also credit online learning for the enrollment upticks at some tribal colleges, because it’s allowed them to bring in students from other geographic areas. Robertson said his college is attracting students from Phoenix, for example, who would otherwise have an over two-hour commute.

The additional students put “a lot more pressure on the system,” Robertson said.

Plus, after the pandemic, tribal college leaders hope to keep their enrollment gains, which involves some planning.

Tohono O’odham Community College is renting a building for a center in Phoenix, in addition to building a new arts and science building on campus. The hope is to provide flex courses, offered both in-person and online, to retain students after the pandemic.

Yarlott is also preparing for Little Big Horn College to embrace a hybrid model for the future, so it can keep students who connect best online without losing students who lack reliable internet access at home.

“We all know that we’ll never go back to strictly in-person classes again,” Yarlott said, and he suspects many other tribal college leaders are making similar calculations about how their institutions will change going forward.

But from his perspective, part of what’s attracting students are the things that won’t change about tribal colleges, their mission and sense of community.

At tribal colleges, “we tend to do our students well,” he said. “It’s more of a personal touch on our end … Most of our students are from the local area, so when we reach out, we know who they are. They’re not just student numbers. We actually have a name to their faces. I think, in that way, having that personal attention, personal care, someone that encourages them personally, that helps.”