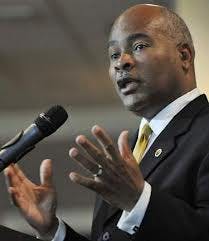 Alabama State President Joseph Silver says he’s being punished for questioning some of the school’s contracts.

MONTGOMERY, Ala. — Alabama State University’s board of trustees will meet Friday to fire embattled president Joseph Silver, according to an email sent from one trustee to the board chairman that was obtained by the Montgomery Advertiser.

In the letter to chairman Elton Dean, trustee Kathy Sawyer states she has received a notice from fellow trustee Marvin Wiggins outlining the potential causes for termination of Silver, who is on paid administrative leave, and she asks Dean to delay the meeting, which is set for Friday at 2:30 p.m.

“I have also received from Trustee Wiggins a draft letter outlining the issues relative to termination of President Silver,” Sawyer wrote Monday in an email to Dean. “It appears from reading the draft letter, the full Board has already decided to terminate President Silver and the only issue to discuss and decide is whether the termination is ‘for cause’ or ‘no cause.’”

ASU officially closed for the holidays Tuesday evening and won’t open again until Jan. 2. Students, who have protested numerous times to keep Silver, have been out of classes since last Friday.

The letter, which was sent by Sawyer to each trustee, also found its way to the ASU faculty senate.

Silver has been on leave since Nov. 26, when the executive committee of the board took that action in an emergency meeting. Immediately following that meeting, Silver claimed he was being punished for questioning several contracts currently in place at ASU that didn’t benefit the school.

A few days later, the full board upheld that action, but with Gov. Robert Bentley in attendance and numerous students protesting the actions against Silver, it elected not to take further action that day on Silver’s employment status.

Despite numerous requests by the Advertiser, ASU and trustees have declined to offer an explanation for Silver’s removal from office. Messages left Tuesday for Dean received no response.

“I think they know there is no reason for me to step down other than the fact that I have raised a few questions about how resources are spent here, and it is not all for students,” Silver said on Nov. 26.

Silver has declined to provide information related to his claims.

The board approved a full audit of all contracts, and Bentley has since ordered a forensic audit to be conducted by a separate firm from Birmingham.

In her letter, Sawyer questions why the board members would take any action prior to those audits being conducted.

“I would strongly urge the Board to postpone any meeting intended to address President’s (sic) Silver’s status as president at this time; at a minimum, delay decision until the investigations have been completed and the findings made public,” Sawyer wrote. “I can see no good to come from the Board’s haste to make a final decision at this time. It is my opinion that this situation has gotten out of control and is now being driven by emotions and personal feelings of some involved. However, as a board, we are charged and expected to carry out a public duty to govern this University in a professional, transparent and respectful manner.”