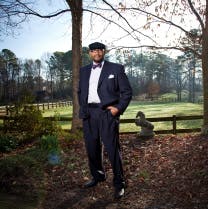 Dr. Pellom McDaniels describes himself as a conundrum in the world of higher education.

“I’m a former professional football player, who is a scholar with a Ph.D., trying to not only change the perception of how Black men are seen in America and globally, but to use my own passion to inspire university students to develop the skills that they need to be contributing members of society,” says McDaniels, an assistant professor of African American studies and faculty curator of the African American history and culture collections in the Manuscript, Archives and Rare Book Library (MARBL) at Emory University.

“Education has always been important to me; I’ve always loved to learn, ask questions and try to figure things out,” he says.

Even as a pro football player, McDaniels strived to make education and service a priority. While playing for the Kansas City Chiefs, he enrolled in a master’s program in history at the University of Missouri-Kansas City. In the community, he noticed and addressed a number of issues among African-Americans surrounding education, poverty and economics.

In 1993, with his wife, McDaniels started the Arts for Smarts Foundation to expose grade school students to fine arts, reading and creativity. McDaniels has applied his personal creativity and knack for problem-solving into several areas of his life.

As an undergraduate student at Oregon State University, he started as a fine arts major. Though he eventually switched majors due to the costly expense of art supplies, he still uses art as an outlet today.

“It’s one of the things I do when I’m trying to think through particular problems and questions that I have related to my research,” he says. “If I’m struggling to understand the dynamics of an event, I will draw or write, but usually it may turn out to be a collage of materials related to that particular event until I get some kind of clarity.”

McDaniels’ persistence in solving problems led him down a path of invention. After being unsatisfied with the quality of lubricant used during a dental procedure, he decided to create his own. Patented and eventually sold to Proctor and Gamble, the lubricant is used in dental offices before and after procedures to prevent tears in the mouth and generate a better experience for patients due to the scent and taste of the product.

In 2000, McDaniels’ NFL career ended when he was diagnosed with blood clots in his lungs. After retiring, he continued his education, enrolling at Emory University, where he received a Master of Arts degree in 2006. He earned a Ph.D. in American Studies in 2007 from Emory, where he focused on researching the impact of Black athletes on 20th century America.

“It was in that time period where I was able to hone in on my own interests in the idea of public performance as it relates to not just sports, but public office, thinking about visual arts, and also trying to understand this notion of Black masculinity,” he says.

In 2012, McDaniels joined the faculty at Emory and has learned to use his skills from the playing field in his new environment.

“In football we would think about making a play,” he says. “Here in academia, we’re constantly trying to make connections and preparing to meet those different challenges. Whether it be through intense research or examining a question through multiple disciplines, it all requires concentration and dedication.”

One of his most prized collections features personal documents of Pulitzer Prize-winning author Alice Walker.

Comprising more than 120 boxes, the collection holds drafts of writings such as The Color Purple, a quilt Walker made while writing the novel, extensive correspondence and fan mail.

“[The Alice Walker Collection] is very unique to our university. We benefit from it greatly and are very grateful to have it,” says McDaniels. “Having the opportunity to talk and break bread with her, to discuss hip-hop or the idea of gender equality is priceless.”

McDaniels strives to provide students with professional intangibles by enhancing their research and communication skills.