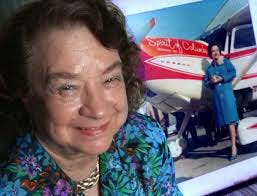 Geraldine Mock embarked on her historic journey 27 years after aviation pioneer Amelia Earhart and navigator Fred Noonan disappeared in the South Pacific while Earhart was trying to become the first female aviator to circle the globe.

Fifty years after she made aviation history, Jerrie Mock chuckled when asked whether she ever got scared while circling the globe alone.

“Scared? Let’s not use the word scared,” she said.

But she had plenty of harrowing moments, from landing by mistake on an Egyptian military base to seeing a burning wire aboard her plane loaded with extra fuel.

Geraldine “Jerrie” Mock, the Ohio housewife who became the first female pilot to fly solo around the world, died Tuesday in her sleep at her Quincy, Florida, home, grandson Chris Flocken said Wednesday. She was 88 and had been in declining health for months.

She was inspired as a child by Amelia Earhart. But while she considered Earhart her hero, Mock said she didn’t dwell on the aviation pioneer’s fate as she made her own journey 27 years after Earhart and navigator Fred Noonan disappeared in the South Pacific while Earhart was trying to become the first female aviator around the globe.

Mock played down her trip as a fun adventure. She flew her single-engine Cessna 180 “Spirit of Columbus” 23,000 miles in 29-plus days before landing in Ohio’s capital city on April 17, 1964. On her trip, she made stops in places such as the Azores, Casablanca, Cairo and Calcutta.

“Airplanes are meant to fly. I was completely confident in my plane,” she said in an interview in April.

But she had radio and brake problems, ran into bad weather, and landed by mistake at an Egyptian military base, causing some tense moments with armed soldiers before base officials directed her to the international airport. She also had to act quickly when she noticed a burning wire while flying over a desert in the Middle East; she switched it off and watched it cool it down while considering what could have happened on her fuel-laden plane.

Dubbed “The Flying Housewife” at the time, the Newark, Ohio, native was a mother of three in suburban Columbus but also an experienced pilot who studied aeronautical engineering at The Ohio State University. She spent months planning her flight with aviation experts and veteran pilots.

Another experienced pilot, the late Joan Merriman Smith, was on the same quest but finished behind Mock.

Mock was honored at the White House by President Lyndon B. Johnson, and appeared on national television. She later added several aviation speed records.

“Nobody was going to tell me I couldn’t do it because I was a woman,” said Mock, who wore a skirt and blouse on her flight and put on high heels after landings.

A life-sized bronze statue depicting Mock holding a globe was unveiled in April at Port Columbus airport on the 50th anniversary of her flight, and it was also commemorated with an exhibit at the National Air and Space Museum.

“Her legacy of dedication, perseverance and belief in [herself] will forever inspire a community and a nation,” Elaine Roberts, president of the Columbus Regional Airport Authority, said in a statement Wednesday.

She is survived by a daughter, after being preceded in death by her two sons. She had 12 grandchildren.

Flocken said Mock didn’t want a funeral service. Instead, as she had requested, she will be cremated, with her ashes to be scattered from a plane flying over the Gulf of Mexico.