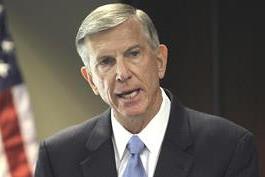 University of North Carolina system President Tom Ross says, “I’m not ready to stop working at age 65.”CHAPEL HILL, N.C. — The head of North Carolina’s public university system was pushed out of his job Friday by an oversight board that heaped praise on his four years of service but didn’t explain the reasons for their move.

Members of the University of North Carolina board emphasized their decision to replace President Tom Ross next year was not due to his job performance or that he was turning 65 in June, the age at which his four predecessors left their post running what is now 16 university campuses and a residential science and math high school in Durham.

Ross took over as president in 2011 amid a recession that prompted budget cuts and an increase of 55 percent in average tuition since 2008. Ross also confronted a scandal involving fake grades for athletes and other students at the school’s flagship campus in Chapel Hill. In the past five years, the UNC system has increased the output of students earning degrees and incoming research dollars, a report Friday said.

Ross also took office at the same time that Republicans took control of the General Assembly. Since then, GOP lawmakers have appointed all but a handful of the university system’s board.

UNC Board of Governors chairman and Charlotte attorney John Fennebresque praised Ross’s “fantastic work ethic, perfect integrity” and other attributes but found it difficult to explain why he approached Ross days ago about replacing him. A new president might bring important new assets to the job, Fennebresque said, adding there has been no tally of qualities sought in a new leader.

Ross deflected a question on whether he believed he was being sidelined because of political pressure. Fennebresque said politics played no role for him but couldn’t speak for others on the 32-member board.

Attorney General Roy Cooper said Ross was forced out of his position but didn’t offer a reason. The Democrat had spoken to Ross about his departure, Cooper spokeswoman Noelle Talley said.

Gov. Pat McCrory called Ross “a great partner and a long-time friend” but made no mention of the circumstances.

Ross will get a raise to $600,000 and a chance of bonuses until his term ends in January 2016, or longer if a successor isn’t found by then. He’ll get half his final salary during a subsequent year of research leave. That will be followed by a tenured professorship at the UNC-Chapel Hill School of Government.

Despite the departure package, Ross made clear he wasn’t ready to leave but accepted a change that was the board’s right.

The fact that Ross’s predecessors stepped down at age 65 “is a coincidence rather than some design,” said Brad Wilson, a former chairman of the UNC Board of Governors and the CEO of Blue Cross and Blue Shield of North Carolina. Formally tying the university system president’s term to his age could violate age discrimination laws, Wilson said.

Before becoming president of the 222,000-student university system in January 2011, Ross’s career included serving as a state Superior Court judge, president of the private Davidson University, aide to a Democratic congressman and executive director of Winston-Salem’s Z. Smith Reynolds Foundation, a major funder of social welfare and liberal causes.