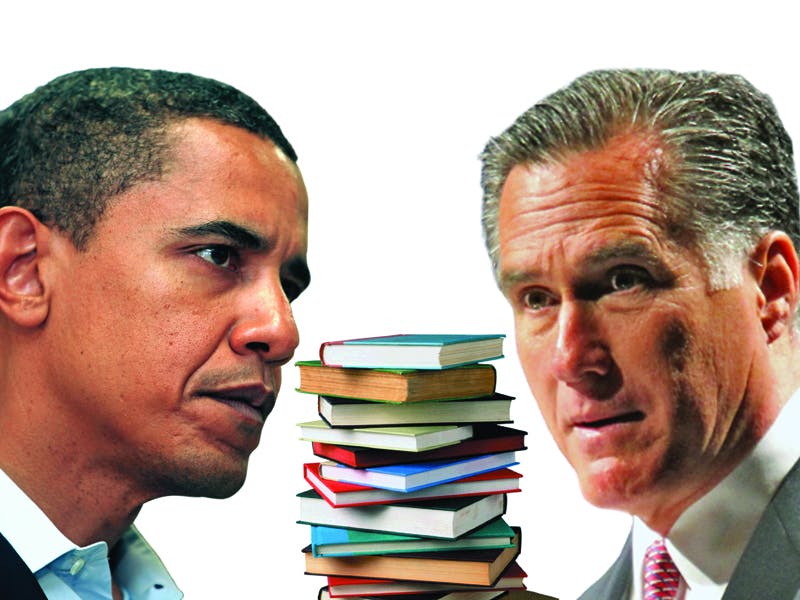 The presidential candidates square off on education

That statement carries over to education as well, as both offer starkly different views on K–12 and higher education policy for the fall campaign.

Obama is touting a large increase in Pell Grants and student ﬁnancial aid during his watch, as well as new grant programs that are driving change in elementary and secondary schools. Romney is oﬀering a diﬀerent strategy that focuses less on government and more on school choice at the K–12 level and cutting regulations in the postsecondary sector.

As in many issues these days, it comes down to different opinions on the role of government. “The president has provided more funding for colleges, and that’s a good thing,” said Antonio Flores, resident of the Hispanic Association of Colleges and

Universities, noting that the Pell Grants program, the government’s main aid program to needy students, is at an all-time high.

Yet Julio Fuentes, president and CEO of the Hispanic Council for Reform and Educational Options and a member of Romney’s education policy team, said spending is exactly what’s wrong with the Obama agenda.

“More federal spending has fueled the problem,” said Fuentes. He notes that college tuition has increased by 25 percent alone since Obama took oﬃce, a period in which “a ﬂood of federal money is driving costs out of control.”

Romney’s education policy paper states that Pell increases have outstripped tuition since 1982, and his running mate, Rep. Paul Ryan, R-Wis., has sought to trim Pell eligibility during his tenure as chairman of the House Budget Committee.

“This country is putting more money into higher education than at any point in history, yet a postsecondary education continues to become more expensive for students and their families,” states the Romney education blueprint, A Chance for Every Child.

But the Obama camp counters that ﬁnancial aid increases have blunted some of the impact of the recession on college aﬀordability. By raising the maximum grant and broadening access, the number of Pell recipients has increased by more than 3 million — 50 percent more than in 2008.

The increases are part of an administration goal that the U.S. have the highest rate of college completion worldwide by 2020. Along with a higher Pell Grant, Obama gained approval in his large increase in Pell Grants.

Advocates also note that the president accomplished the Pell goals largely through savings generated by ending student loan subsidies to banks and having the government manage subsidized loans. That move saved $40 billion, much of which was plowed back into aid for needy students. Since Romney has suggested revisiting the private sector role in lending, there is concern that federal subsidies to banks could return with a GOP victory.

“To go back to that would be a huge mistake,” Flores said. “It was like free money for the banks.”

Yet given the mounting debt facing students and a dearth of jobs at their graduations, some advocates also want to see a bolder President Obama in the months ahead.

“He has nothing to lose,” said Victor Sanchez, outgoing president of the United States Student Association. “He should keep expanding grants and the federal role in student loans.”

Elsewhere, Romney has criticized the U.S. Department of Education’s gainful employment initiative, which would allow for-proﬁt colleges to access student aid programs only if they can show that their graduates get jobs suﬃcient to repay loan debts. His education paper calls the initiative “ill-advised.” The GOP candidate also wants fewer federal regulations in higher education and says institutions place too much emphasis on time-to-degree rather than on whether students have gained competencies that can help them move into the workforce.

One Romney plan is to take the federal aid that schools receive to educate low-income and disabled children and make such assistance portable so that families would get the money. The idea is that many families, if given access to this federal aid, could use the money on tutoring, private schools or other options. The plan would aﬀect the $15 billion Title I education program and the $12 billion Individuals with Disabilities Education Act (IDEA). This plan ﬁts squarely with the goals of Fuentes’ organization, Hispanic CREO, as it seeks to broaden school choice for low-income children, primarily Latinos.

With dropout rates of 50 percent in some communities, “we face an educational crisis for the Latino community,” he said. “The idea is to help parents choose the best schools for their children,” Fuentes added.

Romney would also focus more attention on charter schools, or public schools that can operate without many of the rules and regulations of traditional public schools. He also has questioned teacher tenure and the value of small class sizes, stances that have angered teacher unions.

According to Dennis Van Roekel, president of the National Education Association, the Republican has a “misguided and out-of-touch mentality that class size doesn’t matter and children should get as much education as they can aﬀord.”

The Obama K–12 record includes the launch of the Race to the Top initiative, through which states receive competitive grants to support innovation and turn around failing schools. The president also has given states the ﬂexibility to waive some regulations

under the No Child Left Behind Act, preventing thousands of schools from being labeled as “failing” schools.

In the economic stimulus bill, the president provided nearly $100 billion to protect teaching jobs and provide aid to states and localities. Obama’s budget plan for 2013 also includes some insights into how he might approach future education policies if elected to a second term. It includes $5 billion for a new initiative the White House

said would “reshape the teaching profession” by creating new teacher career ladders and reforming colleges of education, among other changes.

While the much-discussed DREAM Act has never passed Congress, the president administratively ruled this year that teens and young adults that steer clear of criminal activity and pursue an education could apply for legal status that prevents their deportations. While falling short of the DREAM Act’s path to citizenship for such individuals, the idea has drawn praise from student and immigration groups.

Romney’s views are less clear. He criticized the DREAM Act during the GOP primaries, but in a speech in late June, he told Latino elected oﬃcials that he would act to “supersede and replace” the president’s administrative action. That prompted criticism from the Federation for American Immigration Reform (FAIR), a staunch

“After stating deﬁnitively that he would veto the DREAM Act during his campaign for the Republican nomination, Gov. Romney needs to be more forthcoming with the American people about his plan to ‘supersede and replace’ President Obama’s backdoor amnesty,” said FAIR President Dan Stein. He has been highly critical of

Obama as well, calling the president’s administrative action “a massive amnesty for illegal aliens through illegal and unilateral action.”

Still, the success of DREAM Act legislation ultimately rests with Congress, which is unable to muster the decisive support needed for the bill to clear both the House and the Senate. A continued split in leadership — with Republicans controlling the House and Democrats running the Senate — is likely to prolong that stalemate.

For more information on President Obama’s record on education,

To access Romney’s education blueprint, A Chance for Every Child,