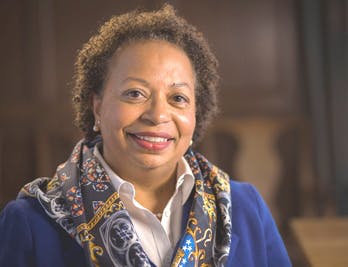 Trinity College President Joanne Berger-Sweeney plans to forge a stronger bond between the college and the city of Hartford, Conn.

Dr. Joanne Berger-Sweeney, an accomplished neuroscientist and the current dean of the School of Arts and Sciences at Tufts University, has been tapped as the next president of Trinity College in Hartford, Conn.

Berger-Sweeney, who currently serves as chief officer for Tuft’s largest school, will be the first African-American and the first woman to hold the post at the private liberal arts college founded in 1823.

“I am thrilled and excited. I am scared and awestruck,” says Berger-Sweeney in an interview with Diverse. “I am humbled that the search committee and the board of trustees are instilling this incredible, beautiful, almost 200-year-old institution to my care.”

Berger-Sweeney says that she’s excited by the potential to help forge a stronger bond between the college and the city of Hartford, which has witnessed its share of urban decay and blight over the past few decades.

“There are wonderful things the campus is doing for the city of Hartford, but it doesn’t feel at the moment that everyone’s role is headed in the same direction,” she says. “I would love the opportunity to prove to the city of Hartford that Trinity is not an ivory tower institution that doesn’t want to spread education outside of its walls.”

She says that instituting new training programs and certificates may be a way to bring the community onto campus and help improve town and gown relations. “Trinity College is an elite liberal arts institution with an urban pulse,” she says, borrowing a phrase she heard from an alumnus of the school. “I feel like I’m the luckiest person in the world.”

The selection of Berger-Sweeney makes her a historic first and one of a handful of Black college presidents to lead private, predominantly White institutions. She credits her participation in Spectrum Leadership Program — a year-long program for high-level administrators of color interested in becoming college presidents — that is sponsored by the American Council on Education (ACE). Dr. M. Lee Pelton, who is president of Emerson College in Boston and African-American, was assigned to mentor Berger-Sweeney throughout the duration of the program.

“There is something about seeing someone else doing it; being able to ask frank questions and having someone who can help prepare you for an incredibly rigorous selection process,” says Berger-Sweeney, who applied for the position in November and was notified that she had the job last week. She begins on July 1, 2014.

Berger-Sweeney says that in order to help create a pipeline for other minority presidents, there have to be more people willing to help minority candidates understand the selection process and how to prepare. “That’s the key part for me” she says. “Are there qualified people of color out there? You better believe it. But it’s not just the qualifications, it’s knowing what the process will be like.”

Berger-Sweeney holds a Ph.D. in neurotoxicology from the Johns Hopkins School of Public Health and been dean of the School of Arts and Sciences at Tufts since 2010. Before arriving at Tufts, she spent 19 years as a faculty member and associate dean at Wellesley College.

As dean, she is credited with launching several undergraduate and graduate academic programs including the Center for the Study of Race and Democracy that is headed by historian Dr. Peniel E. Joseph. She also initiated an interdisciplinary cluster hiring program for faculty and initiated a summer bridge program for liberal arts students transitioning from underserved high schools to Tufts.

“Joanne offered substantive support for diversifying the Tufts faculty, especially in terms of recruiting African-Americans to campus,” says Joseph. “She was also instrumental in turning Africana Studies into a major. I worked closely with her in launching the university’s Center for the Study of Race and Democracy [where Joseph is founding director], the first research-based center at Tufts dedicated to examining the intersections between race and democracy at the local, national and global levels. Overall, her leadership has been energetic, intellectually ambitious and impressive.”

In announcing her appointment, Paul E. Raether, chair of the Trinity Board of Trustees, praised Berger-Sweeney as the ideal person for the high-profile position. “Trinity College is an institution that honors its traditions and embraces its future, and with the selection of Joanne Berger-Sweeney, we have found the right leader to renew our commitment to the value and delivery of an excellent liberal arts education,” says Raether. “Dr. Berger-Sweeney has devoted her career to the education of students who are smart, eager to work with faculty and ready to engage in many and varied ways across campus life — with this experience, she is a natural fit for Trinity and Trinity for her.”

Jamal Watson can be reached at jwatson1@diverseeducation.com. You can follow him @jamalericwatson.