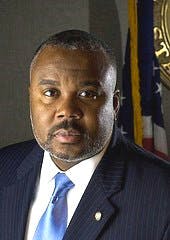 Senator Quinton Ross said his failed bid to become president of Alabama State University had nothing to do with his opposition to the nomination of two candidates to the school’s board of trustees.

MONTGOMERY, Ala. ― State senators have blocked two of Gov. Robert Bentley’s four selections for the board of Alabama State University, prompting him to resume his search for trustees at the Montgomery university that has been a focus of his administration for more than a year.

Gilpin, Thornton and Brooks have been trustees and were nominated by the governor for new terms. Washington would have replaced Thomas Figures of Mobile. The trustees set policies for the university and select the university president.

Waggoner said Gilpin and Thornton had lots of support, while Brooks and Washington had opposition that included the senator who represents Alabama State, Democrat Quinton Ross of Montgomery. Orr said he voted against the two because he had never met them and Ross asked that they not be approved.

“They give me too much credit,” Ross said Wednesday. He said the vote for rejection came mostly from Republicans who are upset the governor has continued to push for a 2 percent raise for education employees after they thought they had an agreement with him that he wouldn’t.

Ross, an Alabama State alumnus, was one of the three finalists for the university’s presidency in December. Instead, the board of trustees chose Gwendolyn Boyd, a former administrator at Johns Hopkins University. Ross said that was not a factor.

Bentley, president of the ASU board by virtue of his office, made a rare visit to the Senate on March 19 to push for approval of his four selections. He said they had been supportive of Boyd’s hiring and they were helping make a difference at the university.

The governor issued a statement Wednesday saying that Washington and Brooks have excellent records, and he was disappointed they weren’t approved. “It is unfortunate that committee members chose to put politics over the best interests of Alabama State,” he said.

Bentley did not elaborate. He said he would move ahead with finding two new candidates who will support Boyd.

Another Alabama State alumnus in the Senate, Democrat Bobby Singleton of Greensboro, said Washington has a good professional record, but he and other alumni were concerned that Washington did not have a four-year college degree. University trustees traditionally have four-year college degrees, and it would be a bad precedent to approve a trustee without one, he said.

“We need to protect the sanctity of our university,” he said.

Waggoner said there were enough senators concerned about Washington and Brooks that the opponents would have shut down the Senate if the Confirmations Committee had sent the two names to the Senate for approval. He predicted Gilpin and Thornton will get approved by the Senate before the 2014 legislative session ends Thursday night.

Alabama State has been going through changes since former President Joseph Silver and the trustees parted ways in December 2012 after he alleged inappropriate dealings by some officials at the university. The governor has hired a forensic accounting firm to do a review of the university, but it is not complete. The firm has issued preliminary findings, which the governor turned over to state and federal prosecutors for review.