Access to Higher Ed for Diverse Populations a Global Challenge 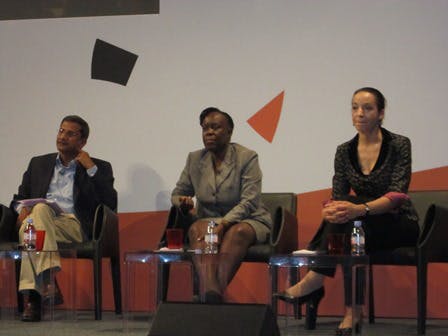 (Left) Pankaj Chandra, Professor of Production and Operations Management at the Indian Institute of Management Bangalore, (middle) Lillian Tibatemwa-Ekirikubinza, Lord Justice Professor in the Constitutional Court of Uganda, and (right) Stanford economics professor Caroline Hoxby discuss expanding access to higher education for diverse populations throughout the world.Paris — Diversity in higher education should be viewed by the long-term benefits it affords individuals, society and academe and not just by the short-term issues that arise from efforts to bring more members of historically disenfranchised groups to campus.

That was one of the key takeaways from a panel discussion held at the historic Hotel de Ville Thursday at the second annual Princeton-Fung Global Forum.

The panel — formally titled “How to Expand Access for a Diverse Population” — featured scholars from three nations, including the United States, that are wrestling with how to use policy to encourage greater social parity in postsecondary education.

The discussion transcended the ongoing debate about the merits of diversity on campus — as well as how to achieve it — and delved into what colleges and universities should do to make optimal use of the diversity that’s already been achieved.

“The real challenge of diversity is to create a classroom learning environment that creates a collective pride based on individual pride,” said Pankaj Chandra, Professor of Production and Operations Management at the Indian Institute of Management Bangalore.

Chandra said that, while universities are seen as a “mechanism of integration,” questions remain about whether universities are “assimilative in nature [so] that the value of diversity is not taken advantage of in a classroom.”

Chandra touched on the system of affirmative action in India known as “reservation,” which reserves roughly half of all university seats to students from disadvantaged backgrounds and includes members of various castes and tribes.

The fact that reservation has been extended over the decades despite being seen as a temporary fix is evidence of society’s inability to bring about more social parity, Chandra said.

“It truly shows the failure of society to remove the inequalities that have come to exist for a variety of different reasons,” he said.

Lillian Tibatemwa-Ekirikubinza, Lord Justice Professor in the Constitutional Court of Uganda, said that, while affirmative action is meant to right historical wrongs, more should be done to eliminate inequalities in education at earlier stages instead of in higher education, which she characterized as “the end of the line.”

“We are dealing with issues at a very wrong state,” said Tibatemwa-Ekirikubinza. “We should look at the quality of primary education [and] secondary education, and ensure that everybody who has education has quality education, irrespective of where you come from, and then you perhaps won’t need affirmative action for each and every category of people.”

As an example, she noted how most economically disadvantaged students in her country go to schools that do not offer science at the secondary level because offering the sciences is an “extremely expensive” endeavor.

“And that’s why it’s important to solve issues of discrimination at the lower level rather than at the end of the line,” Tibatemwa-Ekirikubinza said.

Caroline Hoxby, economics professor at Stanford University, shared lessons learned from research she has done into why high-achieving students from low-income backgrounds were generally not applying to some of America’s more competitive universities — even though many could go for free through financial aid from the institutions.

“When we started doing the research, we felt, and a lot of people thought, there was no way to increase economic diversity or representation of low-income students without practicing some form of … affirmative action,” Hoxby said.

But in looking at the matter more deeply, researchers discovered that the primary reason low-income students were not applying to more selective institutions stemmed from a lack of information.

She added that her research found that, when students from low-income backgrounds were given information about how to navigate the application process, “they were much more likely to apply.”