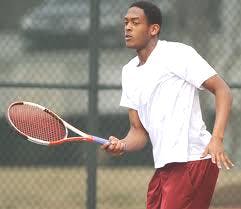 Salif Kante, a native of Senegal, played at Florida A&M and is now beginning a professional career in tennis.

When Salif Kante graduated from Florida A&M University (FAMU) in 2013, he was at the top of his game as a tennis athlete. He came to FAMU from Georgia Perimeter College ranked as the No. 1 junior college tennis player in the nation, and only added to his awards and honors over the two years he played for the institution, including being named the Mid-Eastern Athletic Conference (MEAC) Player of the Year in 2012 and 2013.

“He was a gentle giant,” recalls Carl B. Goodman, FAMU’s head coach of men’s tennis, referring to Kante, a 6-foot-5 public relations major who excelled on the courts and in the classroom. “He was one of the most talented players and nicest people ever.”

Today, Kante, a native of Senegal, is embarking on a career as a professional tennis player, hoping his performance will incite as much excitement as the late Arthur Ashe did in his professional career following his intercollegiate tennis career at the University of California, Los Angeles.

Just as Ashe helped change the intercollegiate and professional tennis world, Kante is part of a new generation of college students who have been steadily changing the character and face of intercollegiate tennis in America.

Today, international students make up nearly 50 percent of all American college varsity tennis players, according to unofficial estimates by the United States Tennis Association (USTA), the national governing body for the sport of tennis. A majority of those students are Hispanic or European.

African-Americans make up between 10 to 20 percent of the remaining players, according to USTA estimates. They are as likely to be playing at a historically White college or university as they are at a HBCU as both groups of institutions scramble for the best talent they can find.

“I think if you have the ability, the opportunities are there,” says Larry Strickland, Howard University’s men’s and women’s tennis coach.

“I still bring in bright Black students,” Strickland adds, referring to the increasingly tough competition for talent. However, he admits that “it’s getting tough” as more top Black students are recruited by top schools, leaving other institutions with more open spots for international candidates.

“I just have to work harder,” Strickland says. “It’s forcing us to look at international students.”

The day-after-day talent search comes after several years of college tennis programs, especially those for men, being shut down at some institutions. College tennis also is seeking to attract a new generation of young people to the sport.

“I believe tennis is growing,” says Jean Desdunes, USTA senior director of diversity and inclusion. “[Although] probably not as fast as we would love to say, [tennis] is not going backward as some other sports are.”

Though college tennis is a respected sport, it has never drawn the crowds and dollars of college football and basketball. It also lacks the media attention that football and basketball receive. It has enjoyed less sustained surges in popularity, especially among people of color, despite the star appeal of numerous tennis players over the decades, including Venus and Serena Williams.

Still, tennis has a niche in intercollegiate sports that is unlikely to disappear anytime soon.

To alleviate these challenges, college tennis is methodically reinventing itself. To help boost the interest of youngsters, colleges and campus tennis clubs are working with the USTA, focusing on grassroots training and development of young talent with emphasis on quality of training over quantity.

College tennis is trying to cultivate previously untapped sources of financial support in various ways. It is also trying to better articulate its message to college-bound students and to the general public, offering more than enough choices of what to do with their time and money.

At Southern University and A&M College in Baton Rouge, La., the tennis program is now in its third year of a partnership with the Baton Rouge Recreation Commission, through which a university tennis coach spends one or two Saturdays per month with children ages six to 18 helping them learn tennis basics and more.

“The young kids are having fun,” says Jeffrey Conyers, coach of the women’s tennis team at Southern. A native of Thomasville, Ga., Conyers credits the same kind of public recreation center program with nurturing his interest in tennis as a child.

In the Baton Rouge program, Conyers says some youth are becoming interested enough to pursue tennis in high school and on the collegiate level, where they can potentially receive scholarship aid. “We definitely have grassroots programs,” says Conyers, who notes that the recreation commission project is one of several “community service” efforts by his tennis team members.

Howard University’s tennis program works with the Washington Tennis and Education Foundation to expose the sport to about 45 to 50 children in the District of Columbia’s Ward 7 neighborhood.

To help young people get a feel for the game, Howard takes its tennis players to the foundation’s tennis center to play. The tennis team also brings young people to the university to watch tennis matches, hoping that the exposure will spark interest. Strickland, who notes that tennis is usually relegated to “snippets” in television coverage, says seeing the game up close gives young people a better idea of the game and “the level they have to aspire to” in order to be competitive.

In cooperation with the USTA, FAMU holds a diversity camp each year to mentor students age 10 to 17. Originally a program for Florida youth, it now accepts students from around the country. The program draws 35 to 45 students each year, says Goodman.

Additionally, coaches are hoping that the rebuilding of the American Tennis Association (ATA), the group organized in the days of racial segregation to attract Blacks to the sport and is credited with helping legends Althea Gibson, a graduate of FAMU, and Ashe, will help spur interest in tennis among more Black Americans.

The ATA, which fell on hard times in the years following the desegregation of college sports programs and organizations, is regrouping and hopes to mark its 100th anniversary in 2016 with the revival of its Hall of Fame, opening in Fort Lauderdale, Fla., with a tennis facility and stadium. Planners also envision holding the annual HBCU tennis championship matches at the new location.

“It’s important to have a home so they can not only have a repository for their history, but also a place where young people can see the future,” says Al Tucker, advisor to the ATA board of directors and vice president of multicultural business for the Fort Lauderdale Convention and Visitors Bureau. The city is providing access to land and offering the ATA technical assistance in charting its plan for the facility.