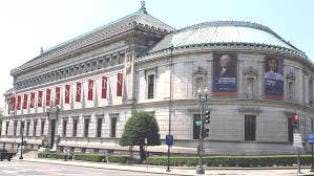 WASHINGTON — One of the nation’s oldest museums and its art college will be allowed to merge with two larger institutions, effectively dissolving one of the few independent art galleries in the nation’s capital, a judge ruled Monday.

The ruling by District of Columbia Superior Court Judge Robert Okun determines the future of the Corcoran Gallery of Art and its college after years of financial and managerial trouble. The decision comes days before the Corcoran college’s new school year is to begin.

Trustees of the Corcoran will now merge the museum and college into George Washington University and the National Gallery of Art, handing over its $2 billion in assets. The Corcoran will become an art school within the larger university.

“Today we take a dramatic step toward realizing a dynamic partnership that will safeguard the Corcoran legacy for generations to come,” said George Washington University President Steven Knapp.

A group of students and faculty fought the merger, arguing the Corcoran could be saved with better leadership, philanthropic support or a better partnership model. Witnesses in the court case described an organization in limbo with a broken fundraising operation and struggling board.

In a city full of government-funded museums, the Corcoran was one of the few independent art galleries and was celebrated for its adventurous programs in the past.

Okun had to decide whether to allow a break in the Corcoran’s 1869 deed of trust that established the museum to allow for the merger. It was a legal question of whether it was “impossible or impracticable” to continue the original deed and whether the merger was the best alternative.

“This court finds it painful to issue an order that effectively dissolves the Corcoran as an independent entity,” Okun wrote. “But this court would find it even more painful to deny the relief requested and allow the Corcoran to face its likely demise — the likely dissolution of the college, the closing of the gallery, and the dispersal of the gallery’s entire collection.”

Okun wrote that two internationally recognized institutions with strong commitments to art and education had agreed to step in to sustain the college and art collection under the Corcoran name.

Under the merger plan, most of the 17,000 artworks would be given to the National Gallery of Art, which would run exhibit programs in less than half the current gallery space. Most of the building would be devoted to the art school as part of George Washington University. The Corcoran would also give the university at least $35 million from recently sold art to pay for initial renovations, and the university would pay for future renovations.

Corcoran attorney Charles Patrizia argued the trustees had no choice but to seek support from larger institutions, citing $28 million in cumulative deficits since 2008 and 40 years of struggles. At some points the Corcoran has struggled with making payroll. The Corcoran college’s accreditation is endangered because of its financial problems, Patrizia said in court.

Opponents of the merger object to the giveaway of Corcoran art and real estate, as well as the separation of the museum and college. They pointed to a recent turnaround of the Los Angeles Museum of Contemporary Art, which also had considered merger and takeover options.

The opponents presented alternatives to preserve the museum and school together, including a proposal from a Washington philanthropist to lead a campaign with a new board of donors who have said they would help make the Corcoran a world-class center for creativity. A separate proposed partnership would have the University of Maryland invest $46 million into the Corcoran, making the Corcoran independent but affiliated with the university.

While the judge found some of the opponents’ criticism of the Corcoran’s past management practices valid, he was not convinced the alternative proposals “amorphous and aspirational as they are” would be as consistent with the Corcoran’s founding purpose.

“Undoubtedly, Mr. Corcoran would not be pleased by this turn of events,” Okun wrote. “It seems likely, however, that he would be pleased to see that the college will be preserved through its partnership with the very university to which he donated both property and his company’s archives … and that the gallery will be preserved through its partnership with one of the country’s pre-eminent art institutions.”