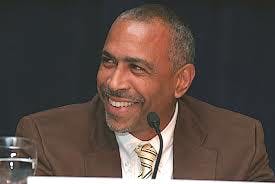 Dr. Pedro Noguera studies schools that seek to close the achievement gap by addressing the societal and economic shortfalls of K-12 students.

“We ask our schools to do something that we ask no other institution to do,” Noguera said during his lecture this week at UCLA, “A Roadmap for Reform: Supporting Black and Latino Youth.” “That is to serve everyone who walks in the door. Not to pick and choose, not take just the ones who are motivated and well fed. We serve them all. The children with the greatest needs tend to be the children who do the least well.

“The sad part is that we blame the schools for these failures, rather than blaming our society for setting up those schools to fail.”

Education researcher C. Rob Shorette is also on board with the need to deviate from ineffective reform strategies.

“Dr. Noguera has presented us with an unfortunate paradox in education,” Shorette said. “We have a pretty good idea of what needs to be done to promote student achievement and have examples of promising practices across the country, yet we don’t seem to heed the lessons learned from those successful examples. We are not doing a good job at mirroring those strategies, especially in the schools that need it the most.”

Noguera noted that, although we have been reforming schools for a long time, approaching reforms as if they are fads is counterproductive.

“In spite of all the efforts and all the money invested in various kinds of schemes, we haven’t seen any sustained improvements, particularly in our urban districts,” said Noguera, who emphasized strategies outlined in his recent book, Schooling for Resilience: Improving the Life Trajectory of Black and Latino Boys. Fads change with each administration, but we should know by now is that there is no silver bullet solution and we need to remind our policymakers of that.”

Some researchers believe that the problems Noguera identified, including too much top-down management, lack of capacity building and failure to learn from successful examples, may spill into higher education. “It’s no surprise that our inability to deal with outcome inequality, and access to a quality education in K-12, has led to those inequalities being reproduced at the postsecondary level,” Shorette said.

According to the 2012 “MetLife Survey of the American Teacher,” principals and teachers nationwide identify family engagement to be one of the most challenging aspects of their work. Noguera finds this framework paramount in reforming schools and should not be treated as a business transaction, or as he says, “capacity building for schools by engaging families as partners, rather than consumers.”

Other attendees included doctoral researcher Eric Felix of USC’s Center for Urban Education, who said he initially intended to “take notes and live tweet Noguera’s commentary, but his words were too captivating.”

“In a room with a passionate orator, I just sat there listening and was reminded of two things,” Felix said. “First, that people trump policies. Those policies aren’t self-acting, as well intended as some are; Pedro reminds us that people and culture are just as important, if not more so, than a good policy. Second, a deficit-minded perspective is still pervasive, not only for students, but for teachers as well.”

Noguera was also critical of assessments as being the end-all for qualifying student potential. “Since No Child Left Behind, we focused far too much on assessment, and not nearly enough on teaching and learning. We must assess a child to understand where they are at and what they have learned, but we should use assessments as tools, not weapons. These weapons are used to rank children, judge teachers and label schools.”

Knowing that poverty is one of the biggest constraints in public schools, it is largely ignored.

“It is not because poor children cannot learn, but when you ignore the needs of children, poverty can be disabling,” said Noguera. “Children whose basic needs are not met are distracting and add to learning challenges. We know this, but the irony is that poverty is being ignored.”