RU Ready for Work Program Prepares Students for the Future 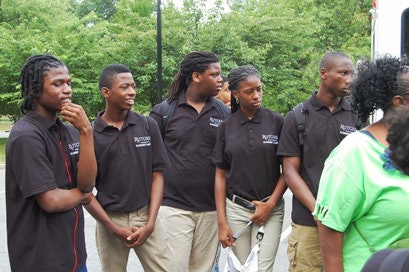 Students from the RU Ready for Work Program at Rutgers University participate in summer programming. The program is credited with boosting college enrollment rates among students at the Newark high schools where it operates.

Newark, NJ — Lakeisha Bright knew she would be in for a rough ride during her senior year at West Side High School based on all the changes the high school had been going through as of late.

“My junior year was very stressful because they kept making changes at my school,” Bright said last summer. “We had four different principals and every time a new principal came they would change everything.”

By the time fall arrived, Lakeisha felt “overwhelmed and unprepared for the whole college process.”

“I’m not really getting as much support from my school as I would (like to) so it’s up to me to really get everything done,” Lakeisha said in November.

Fortunately for Lakeisha, she didn’t have to go it alone. She turned to RU Ready for Work—a Rutgers University-based college access program that collectively serves about 20 or students from West Side High School and a few other Newark high schools each year.

Through the program, students get college advice that their regular school counselors are often too busy to provide, cash stipends of $100 per month to participate during the school year, and part-time summer jobs—some of them based on the Rutgers campus—for six weeks that pay minimum wage.

A leading college access expert says the RU Ready for Work model holds great potential for increasing the number of young people who enroll in college.

“If we’re going to solve issues around increasing college attainment and closing gaps in attainment across groups, we really do need the involvement of a whole range of different players in this,” said Laura W. Perna, a higher education professor at the University of Pennsylvania and founding executive director of the Alliance for Higher Education and Democracy, or AHEAD.

The RU Ready for Work program is financed largely with federal Workforce Innovation and Opportunity Act funds that are distributed through the Newark Mayor’s Office of Employment and Training. As its name suggests, the program was originally conceived as a job readiness program.

However, as students told program officials the kind of careers they wanted to pursue, it soon became evident that post-secondary education had to be included, said Diane Hill, assistant chancellor at Rutgers University-Newark.

“If this is the job you want to do, this is the path, and it requires college,” Hill said, explaining the shift the program took in its work with young participants.

“So we started to have them map out success plans,” Hill said. “They had to actually say, ‘I’m going to do better.’” Doing better meant taking advantage of the program’s recommendation of tutoring and its offer of SAT prep.

Of the 87.6 percent who complete the program, they enroll in college at an average rate of 82 percent—much higher than the historic rate of 48 percent at West Side High School.

That’s where the program began in 2008 to address the “overwhelming evidence of disproportionate disadvantage.” West Side is in one of the most impoverished census tracts in Newark.

The program size ranges from 19 to 22 each year. Program participants must have a minimum GPA of 2.0.

The program is run by two program coordinators, including one who is also an adjunct at Rutgers; an assistant director; and a curriculum specialist. A city grant funds 1½ of the positions; the others are donated by the university.

The program costs from $3,000 to $4,000 annually per student. That cost includes bus tickets to get to after-school programming at Rutgers and the $100 monthly cash stipends.

Hill admits at first she didn’t understand why young people would need a cash incentive to take advantage of a program meant to help them get to the next stage in life.

“I used to think they should want to do it. We shouldn’t have to give an incentive,” Hill said. But her perception changed once she began to ask students what kinds of things might hinder their program participation. Many indicated they had to work after school to pay school fees or buy their own shoes.

“Students are kind of thankful that they have this incentive attached to it,” Hill said. “To me, it’s a simple fix to be able to give them an incentive to say if you do this, if you commit, this is what we’re going to give you guys at the end of the month. And I think that it’s a minimum for a lot of the work that they’re doing.”

Perna, the professor at the University of Pennsylvania, agreed.

“Students have to figure out a way to have their basic needs met before they can even begin to think about college,” Perna said. “The one potential benefit from the stipend could be it’s enabling these students to engage less in paid employment. If they’re spending less time working, they have more time hopefully to engage in getting academically ready for college.”

Finance permeates much of the programming.

One recent seminar stressed the importance of applying for scholarships.

“Financial aid will only cover so much,” Michael Dillard, one of the two program coordinators, told program participants. “So what else are you going to do in terms of financing that education?”

Dillard, who is also an adjunct professor in the School of Public Affairs and Administration at Rutgers University-Newark, advised the students to search for and apply for scholarships and to write the required essays—even if the students dread writing—to at least try to lighten student loans. He assigned them to research at least two scholarships and be prepared to do a presentation on each at the next seminar.

Dillard is available to the students for more than just the seminars. Lakeisha, the West Side High School student, credits Dillard with doing more than her school counselor to help her get through the college search and application process

“Guidance counselors are always like, ‘Did you apply to this college?’ Not, ‘Do you know how to?’” Lakeisha said.

Lakeisha said Dillard paired her with a female college student, who was also an RU Ready for Work alumna, to help her fill out college applications. Research shows that such one-on-one help with the application process is one of the most useful things programs can provide.

“They gave us deadlines to do everything,” Lakeisha said. “They were really, like, on us.”

Lakeisha has been accepted into a number of colleges and plans to enroll at Kean University, a university a few miles outside Newark.

She hasn’t decided on a major, but her outlook is bright.

“I’m going in undecided because I feel as though I have a lot more to learn about myself and I need to grow more before I decide what I want to do with the rest of my life,” Lakeisha said.