Folt Advises Colleges to Get More Involved with High Schools 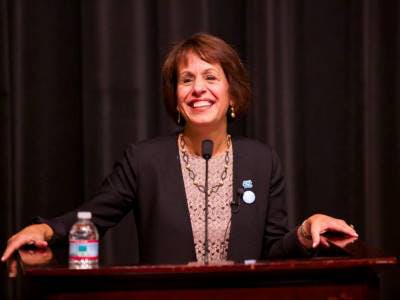 University of North Carolina Chancellor Carol Folt says colleges need to invest in advising and providing academic support to students during their freshman year in college.

WASHINGTON — In order to make higher education a reality for more students from diverse backgrounds, colleges and universities must be more proactive about reaching students when they are still in high school.

That was the heart of the message that University of North Carolina Chancellor Carol Folt delivered Tuesday at the National Press Club during a talk about ways to increase college access and affordability.

“Develop programs that go directly into the high schools,” Folt said as she touted the UNC Carolina College Advising Corps.

The initiative partners with 64 high schools throughout North Carolina and trains recent college graduates to provide advising to high school students to help them find a college that represents a good fit.

“If you want to solve this problem, you can’t start with the [college] applicant,” Folt said. “You have to go into the high school.”

Folt also stressed the need to invest in advising and providing academic support to students during their freshman year in college.

“Pay attention to what takes place in the first years,” Folt said. If institutions fail to invest in students during their first year in college, “no matter how much you spend they aren’t going to be successful.”

Folt’s remarks come at a time when there has been unprecedented attention on the interrelated issues of affordability and completion.

As a solution to the problem, Folt touted the Carolina Covenant — a program that enables low-income students who earn admission to UNC to graduate without any loans by providing them with scholarships, grants and work-study jobs.

She said the program sends a message to students that the college believes that they will graduate.

“That complete belief in those students has been so important,” Folt said.

Prior to the covenant — which also relies on private donations — the graduation rate for low-income students stood at 57 percent. For African-American male students, it stood even lower, at 30 percent, Folt said.

Since the covenant, the entire program average graduation rate is just 3 percent lower than the 80 percent four-year graduation rate for the institution as a whole, Folt said.

“It has skyrocketed,” she said.

Folt refuted the notion that increasing accessibility hurts the academic quality of a program.

She said it would be a disservice to low-income students to weaken academic programs to admit more students. Nevertheless, she said, institutional data suggest admitting more students from low-income backgrounds has not only not hurt academic performance but helped it.

“I have a figure. It shows a diagram of all the students that come in under the Carolina Covenant. If you were to pull out the covenant and need-based aid students, every single metric … SAT, GPA … goes down,” she said. “So I absolutely don’t buy into the argument that it has anything to do with reducing quality.”

Folt said that tuition at UNC is about $8,300 and puts it among the lowest in the nation. The institution utilizes a “need-blind” admission policy and thus ensures that it gets students from various socioeconomic levels, she said.

Folt is the first woman to serve as chancellor at UNC-Chapel Hill. She took the job in the wake of an academic scandal that rocked the university when it came to light that athletes were taking sham courses.

Folt said that UNC has implemented a series of reforms in response to the scandal that include stronger advising and efforts to make sure students don’t get “trapped” into a few majors.

She emphasized the need to pursue courses of study that emphasize critical thinking and other skills that are generalizable to other fields.

Folt said university leaders are subject to a “new normal” wherein they face a critical issue or crisis of some sort on a regular basis.

At UNC, this year alone those issues and incidents have included the vandalizing of the “Silent Sam” statue that pays homage to UNC alumni who died in the Civil War, a successful effort to rename Saunders Hall after protests that it was named after the founder of the Ku Klux Klan in North Carolina, and the February fatal shooting of three Muslim students near campus — an incident she described as “one of the most terrible moments you can imagine.”

The shooting led to an initiative called “Carolina Conversations,” which Folt credited with bringing together students who might not otherwise meet.

Folt suggested that since UNC is the oldest public university in the United States, the campus will have monuments and other tributes to individuals who held views that would be unpopular today. She did not speak of plans to get rid of all such monuments and tributes but said it makes sense to have conversations about “how we honor the past, and respect the dialogue that shapes today.”

“What we said we will do is contextualize history,” Folt said. “That is a really big job.”