U. of Maryland to Honor Pioneering Black Congressman 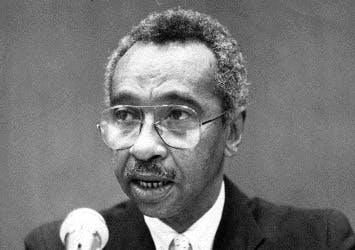 University of Maryland, College Park officials say that next month the Art-Sociology Building will be renamed for Parren J. Mitchell, who successfully sued in 1950 to be admitted into the university’s graduate sociology program.

In a move that brings recognition to a civil rights movement pioneer, the University of Maryland, College Park will rename one of its academic buildings for the late Parren J. Mitchell, the state’s first African-American congressman. Mitchell, who passed away in 2007, was also the first African-American to earn a graduate degree from the University of Maryland, College Park, according to the university.

University officials say that, next month, the Art-Sociology Building will be renamed for Mitchell, who successfully sued in 1950 to be admitted into the university’s graduate sociology program. Former U.S. Supreme Court Justice Thurgood Marshall, who was then lead counsel for the National Association for the Advancement of Colored People (NAACP), led legal efforts that won Mitchell admission into the university.

“Parren Mitchell stands as an exemplar of the values this campus holds most highly — academic achievement, personal courage, diversity and the opportunity to rise on one’s merits,” University of Maryland, College Park President Wallace D. Loh said in a statement.

“His legacy reminds us where we came from and how far we can go,” he noted.

According to the university, Mitchell, a decorated World War II veteran, sued for admission to the graduate program in sociology after having earned a bachelor’s degree from Baltimore-based Morgan State University, a historically Black school. Although then-Maryland President Harry C. Byrd sought to have classes for Mitchell established in Baltimore in an effort to thwart the lawsuit, a court ordered that Mitchell be allowed to enroll at the College Park campus.

Following stints in academic and public service positions during the 1950s and 1960s, Mitchell became the first African-American elected to Congress from Maryland in 1970. While representing Maryland’s 7th Congressional District, Mitchell was one of the 13 founding members of the Congressional Black Caucus and established himself as a champion of minority-owned businesses.

“Congressman Mitchell’s accomplishments brought him broad recognition but were attained while in the pursuit of the public good, and he serves as a shining example of the ideals we seek to foster as a public academic institution. This naming honors the memory of a U-Md. graduate who attained personal prestige while overcoming great obstacles to construct a more just and better world,” said Dr. Gregory F. Ball, dean of the Maryland College of Behavioral and Social Sciences.

The move to rename an academic building in honor of Mitchell happens to coincide with deliberations by a university committee that will make recommendations on whether the campus stadium should continue to bear the name of Harry C. Byrd, the former Maryland president who supported segregation and opposed Black student enrollment at the university until the early 1950s. In addition, the university is planning to install an 8-foot-tall statue of abolitionist Frederick Douglass in a remodeled plaza in front of Hornbake Library.

Last spring, students at the school established a campaign to remove Byrd as the stadium’s namesake. In response, Loh formed a committee to consider the matter and its recommendations are due before the end of the year. The fate of the Byrd Stadium name will be determined by the university’s board.

Loh recently met with the Baltimore Sun editorial board and said that memorials such as the Mitchell building and the Douglass statue can offer a counter to memorials for individuals such as Byrd, whose views and stances have been discredited and abandoned.

“I think there’s a lot to be learned — at least for students — that there are different points of view, and that is part of our history,” Loh told the Baltimore Sun.