Debaters Successfully Argue that Free Speech Is Under Threat 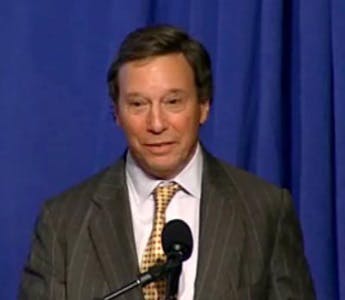 Delphi Financial Group CEO Robert Rosekranz is the organizer of the U.S. arm of the nonprofit organization that hosts debates across the world on pressing issues facing society.

Do the campus protests and debates that roil around speech that has been deemed “offensive” or “racist” signal a threat to free speech or are we simply moving into a more enlightened time when intolerance is no longer quietly accepted? That was the question posed to two teams of debaters and an audience of Yale University students and New Haven, Conn., residents on Tuesday night.

By the end of the debate, the majority of the audience agreed that free speech is under threat.

The debate was hosted by Intelligence Squared US, the U.S. arm of a nonprofit organization that hosts debates across the world on pressing issues facing society. The organizer of Intelligence Squared US, Delphi Financial Group CEO and Yale graduate Robert Rosenkranz, at the start of the debate spoke of his undergraduate experience as one of the few Jewish students on Yale’s campus in the 1960s.

“It was a very sort of tricky place to navigate,” Rosenkranz said. “But I would say that we felt that we were not angry. We felt lucky to be there. The three most generous members of my class at Yale are all Jewish and were all scholarship students at Yale. So we just felt like it was our job to adapt to Yale and not Yale’s job to adapt to us.”

The context today is very different, said John McWhorter, a professor of linguistics at Columbia, and Wendy Kaminer, a writer and lawyer. The fundamental question is not whether microaggressions toward minorities occur—they do, McWhorter said—or whether racism is still alive and well; but how to respond to instances of both when they occur.

“What we’re dealing with is a general argument that indeed has become higher pitched since Ferguson in favor of a leftist position. And I am glad,” McWhorter said. “However, what we’re too often being told is that the leftist position is truth incarnate and that on that position … there can be no further debate. And that’s problematic. It’s problematic on a campus, for example, because it’s fundamentally anti-intellectual.”

Although event moderator John Donvan cautioned the debaters to steer clear of discussing an event that unfolded on the Yale University campus last fall, that incident is illustrative of a new campus paradigm, where retribution for speech that is deemed to be offensive can be swift and overpowering.

Last Halloween, Erika Christakis, a lecturer in early childhood education at Yale University, sent out an email critiquing the recommendations some Yale administrators had made in advance of the holiday regarding “appropriate” Halloween costumes. Christakis, who is also an associate master at Silliman College, one of the university’s 12 undergraduate residential colleges, suggested in an email to her college’s student residents that students ought to have more latitude to choose their own costumes, even those that are appropriative of other cultures.

If a blonde child dresses up as Mulan, she asked, is that anymore or less offensive than a college student donning the garb of a culture other than their own?

“Even if we could agree on how to avoid offense—and I’ll note that no one around campus seems overly concerned about the offense taken by religiously conservative folks to skin-revealing costumes—I wonder, and I am not trying to be provocative: Is there no room anymore for a child or young person to be a little bit obnoxious … a little bit inappropriate or provocative or, yes, offensive?” Christakis asked.

She continued, “American universities were once a safe space not only for maturation but also for a certain regressive, or even transgressive, experience; increasingly, it seems, they have become places of censure and prohibition.”

In the fallout of Christakis’ email, which was quickly disseminated to inboxes across campus, hundreds of students signed a letter calling for her dismissal. Others heckled her and her husband. Christakis resigned for the spring semester. Her husband, a Yale professor and Silliman College master, announced he would be taking a sabbatical.

McWhorter and  Kaminer did not delve into the Yale incident but cited other instances where professors actually lost their jobs due to comments made in the classroom. That paradigm, where an off-the-cuff remark might result in the abrupt demise or destabilization of one’s academic career, contributes to an environment where a free interchange of ideas and debate is diminished, McWhorter and  Kaminer said.

Students face a similar quandary,  Kaminer said. She cited an incident at Amherst College last fall as an example of the silencing of alternative viewpoints. At Amherst a student group demanded that another group of students, who put up “All Lives Matter” posters, be punished for their actions.

Although the debate was not specifically targeted toward racist speech, the conversation quickly shifted to center around what constitutes hate speech toward minorities, reflecting conversations and protests that have been going on at campuses across the country.

“When someone is called a racist in America in 2016, it is practically equivalent to calling them a pedophile,” McWhorter said. “Therefore, when you call someone a racist, you’re effectively silencing all but the bravest people who most enjoy an argument. That’s just the point. Call somebody a racist, you’ve shut them down. And it’s happening a lot.”

Representing the other side of the debate, Shaun Harper, executive director at the Center for the Study of Race & Ethnicity in Education at the University of Pennsylvania, said that calling out an action or statement as racist is not the same as silencing someone.

“The thing is that, when someone says what you are saying or doing feels racist, or sexist, or homophobic, to me, the person who hears that shuts him or herself down,” Harper said. “Right? No one’s saying that “Well, you can’t keep talking. Shut up.”

Harper added, “The person who is being held accountable for saying something hurtful to someone else shuts him or herself down, silences him or herself.”

Jason Stanley, professor of philosophy at Yale, sided with Harper. According to Stanley, the vigorous debate about racism on campus today marks a step forward. “What’s happening on more campuses today … is more speech, not less. Voices too often unheard are kept at the margins, are finally being raised and being heard,” Stanley said.