WASHINGTON — A new website that provides more detailed information on credentials was depicted Monday as a vital tool to help students and job seekers “achieve their dreams,” but questions lingered over how useful it will be to those particular groups. 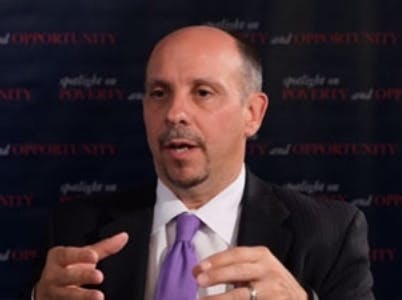 Lumina President and CEO Jamie Merisotis, whose foundation is backing the project, called the development of the Credential Registry “significant and far-reaching.”

To proponents of the new website—formally known as the Credential Registry—the registry shines some much-needed light for employers, colleges, universities and other entities on what various credentials—from badges and certificates to degrees, diplomas and licenses—actually represent in terms of competencies and skills.

“I think the registry and infrastructure that will be built around it represent one of the most significant and far-reaching developments in this field that I’ve ever seen,” said Jamie Merisotis, president and CEO of the Lumina Foundation, the primary backer of the project born through the Credential Transparency Initiative, or CTI.

But the registry, which has yet to go public but can be partially accessed here , faces an uphill battle and should not be seen as the panacea for the problems that employers and job-seekers face in trying to figure out if they represent a good match, several higher education leaders and experts warned.

“Given all the values of American higher education, I think this is going to take some very heavy lifting,” said Molly Corbett Broad, president of the American Council on Education, or ACE, an organization that represents numerous colleges and universities.

Louis Soares, vice president at the Center for Policy Research and Strategy at ACE, suggested that the website, which is heavy on taxonomy and technical terms, may not be the most user-friendly in its current form and requires “some sophistication” on the part of users.

Eleni Papdakis, executive director of the Workforce Training and Education Coordinating Board in Washington state, said that’s why the website should include employment and earnings outcomes associated with various credentials—a lesson she says workforce leaders learned with a similar initiative in her state.

“What we learned was, until we started showing those outcomes, folks didn’t use our information readily,” Papadakis said. “They want to know: What do I need to know to reach this level of earning and if I want to work in this field? I think you’ll see an amazing take-up rate as soon as you see this part of the picture.”

Laurie Dodge, vice chancellor of institutional assessment and planning and vice provost at Brandman University, said high school counselors should sit with students and show them how to use the website.

“That would exponentially increase its use,” Dodge said.

However, others noted that counselors—both at the high school and postsecondary level—will need some training on how to use the website themselves and that—due to high student-to-counselor caseloads—they may not have time to walk students through it once they do.

Gail Mellow, president of LaGuardia Community College, noted that the ratio for counselors to students at her school is 1 to 900.

“So we really need to think about how to make this user-friendly,” Mellow said.

Those involved with the initiative conceded Monday that the new website—as a first iteration—needs to evolve.

And it will depend largely on input from credentialing organizations and others to be useful.

“Think about the names that people use on credentials,” said Bob Sheets, co-director of the CTI and research professor at George Washington Institute of Public Policy, a collaborator on the project. “We’re having a harder and harder time finding what’s under the tent. So we’re asking credentialing organizations to declare the purpose (of their credentials), tell them the connections and list your competencies.

“If I have all that information, smarter people than me will create applications that will get us to the right place,” he said, suggesting that application developers take the registry’s information to more useful levels.

Mellow harbored no illusions that the Credential Registry will magically solve all the information gaps between employers and students and job-seekers.

“It will be useful to higher education institutions as a whole to think about the programming that it offers in a number of different ways,” Rodicio said, adding that colleges and universities need to “break the paradigm” of being “credentialing machines” and start to think more about what their credentials represent.

Along similar lines, Dodge and others said the registry will also help colleges and universities figure out more about how to validate prior learning experiences, assess the “transfer value” of various credentials, and rethink curricula to better align with employer needs.

“Stop thinking so much about the knowledge we’re imparting but more so about how (students) apply those skills to real world problems and solutions,” Dodge said.

Joerg Draeger, a member of the executive board at the Bertelsmann Foundation, said it’s important for the registry to reach people in the early stage of their academic careers.

“It doesn’t make sense to go to school and say, ‘Oops, after four years, I need skills,” Draeger said. “You really have to address the people still in high school.”