During the American Educational Research Association (AERA) annual meeting, The Journal of Negro Education provided some counterprogramming with an event titled “UnAERA.” In its third year, UnAERA focuses on issues faced by Black educators and researchers. This year’s featured speaker was Emdin, a tenured professor in the Department of Mathematics, Science, and Techology at Teacher’s College, Columbia University and an author of the New York Times best-seller For White Folks Who Teach in the Hood…and the Rest of Y’All Too: Reality Pedagogy and Urban Education. 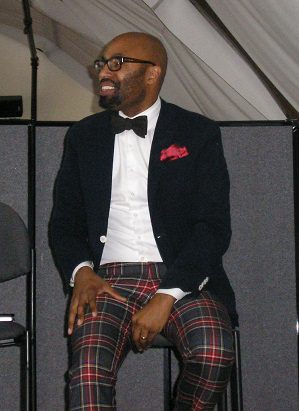 Dr. Ivory A. Toldson, editor-in-chief of The Journal, said UnAERA grew out of a desire to not stick to a typical script of objective research, but rather to make sure Black academics are contributing to the conversation in ways that open up the field to solve the issues they care deeply about.

“How do you be more intentional about your work? How do you be more available to our people? How do we not objectify our people by making them research subjects, but really capture their humanity and deal with all of the social forces that are against them?”asked  Toldson. “Objective research, pure and simple, especially in the hands of people who are implicated in oppression, has not served us well,” he added.

Toldson described Emdin as someone who breaks down the science of educating Black children in a way that gets to the core issues.  He said that Emdin has pushed back on the notion of pure objectivism and is bold and unapologetic about using an authentic Black aesthetic to develop creative and innovative solutions.

In a lyrical, griot-style conversation, Emdin began by detailing what guides his work. He said the first thing he always advocates for is the concept of hip-hop education. Utilizing the hashtag #HipHopEd, Emdin began a conversation on social media in 2011 that has grown into an education movement.

“In my career, I have oftentimes been faced with such venom by the idea of [utilizing] hip-hop and hip-hop culture and saying that hip-hop is an approach, a theory, a practice, a sensibility,” said Emdin.

He said those objecting do not understand the nuances of the culture. His goal with #HipHopEd is to build a community in and out of academia who believe in the idea.

Emdin and his former student, Dr. Edmund Adjapong, has edited the forthcoming book #HipHopEd The Compilation Volume 1, the first in a series of books about revolutionizing urban education. Published by an academic publisher, the book combines a wide range of voices.

“To me, the work has always been to bring hip hop and education together in this interesting space to be able to push back against their perceptions of hip-hop,” said Emdin, whose has done research and taught on urban science education and STEM education.

Emdin said the nature of academia often robs Black scholars of what makes them special. He said that having a doctorate can make people of color believe that all that makes them special to begin with has no value. Therefore, work, he addded, has to be focused on how one retain, propel and teach that special quality.

“If you give them the gift for free, you lose all authenticity,” said Emdin. “You start sounding like, looking like, being like somebody who is other than you, and your work then ain’t got no ‘sauce.’”

He said that when Black individuals in academia start ascribing to the norms of others in the academy, their work can become problematic.

“The role, the job of the Black scholar is to go back and revisit the complexities of our natural experiences and utilize the language and the discourse of power to justify what we already know,” said Emdin, whose new research revolves around Pentecostal pedagogy – teaching and learning through the Black Pentecostal tradition.

There’s an assault on cool going on by people who aren’t cool and who have an interest in devaluing the expression of coolness, said Emdin. Black scholars, he said, should go back and re-embrace their cool and take it into the academic arena.

“I’ve seen hiphop command an audience of hundreds of thousands and have them sitting at the edge of their seats to soak in what the next word is,” said Emdin. “I’ve seen teachers with expert content knowledge—know the science inside, outside, backwards—get in front of young people and put them all to sleep.

“The activation of the imagination and the spirit of the young person connected to the content makes them do amazing things.”

Emdin said that he has had many articles turned down and projects dismissed, but he has been willing to go out on a limb, such as when he partnered with rapper GZA from Wu-Tang Clan to develop the Science Genius B.A.T.T.L.E.S. He said people who scoffed at the project embraced it when it became a huge success.

“When the work is popping, they’re going to come,” he said. “But it’s set up for you not to do the work. So many brilliant ideas embedded in the consciousness of our people that don’t see the light of research day. … Sometimes you’ve got to learn to move.”

The job of Black scholars in the contemporary era is to be a disrupter, Emdin said, advising those in attendance to reclaim who they are, form meaningful connections and use their power for positive impact.

“That project, do it. That blog, write it,” he said. “That article, it does not matter what the folks around you say about whether or not it has value. If they say no, remix it and put it back out.”