Roscoe Nancecmaadmin (EDU)
Running an institution of higher learning is one challenge after another. But that hasn’t stopped Howard University president Dr. Wayne A. I. Frederick from taking on another challenge.

Frederick, 48, who was diagnosed with sickle cell at birth, has launched the Run to Cure Sickle Cell campaign to increase awareness about the disease that disproportionately afflicts Blacks and African-Americans and to raise funds for the Howard University Sickle Cell Center to help in the search for a cure.

He has pledged to run one 5K race per month in 2019. Next up is the LA Big 5K in Los Angeles at Dodger Stadium on March 23. He has run in 5K races in Orlando, Fla., in January and Landover, Md., at the Mid-Eastern Athletic Conference Indoor Track and Field Championships Feb. 23. 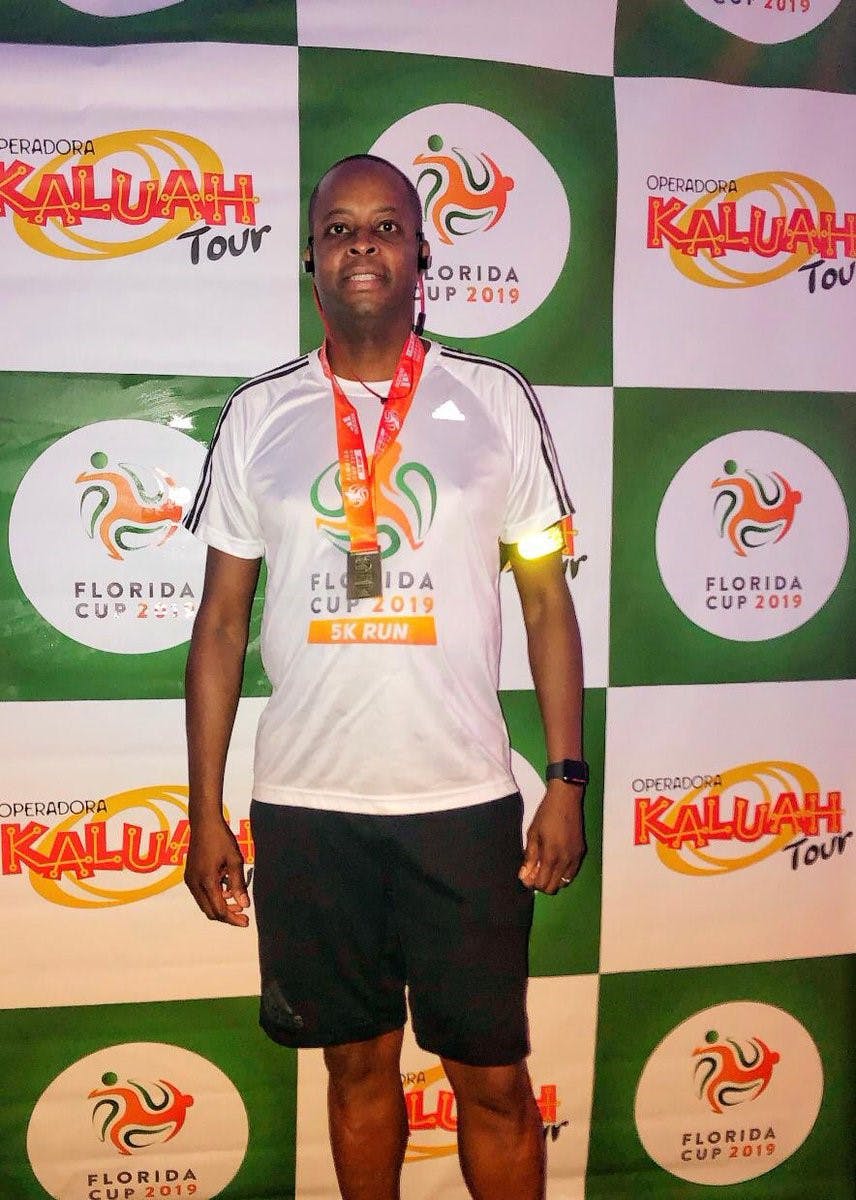 “I felt good,’’ Frederick says, describing his most recent 5K. “I walked more than I wanted to do, but it’s hard to run that many laps on an oval track. I was floored by the level of support and the number of people there. That really bolstered my spirits big time.’

Frederick says that he appreciates the support that he’s  received since announcing this campaign to bring awareness to sickle cell disease and the work of the Howard University Sickle Cell Center.

“People have been donating and it helps bring attention to the need for additional research in this area. People have reached out to me on social media and via email to congratulate me and cheer me on,’’ he says. “I’ve heard from students who have applied to the university who are living with sickle cell. The biggest surprise has been with my friends. I don’t really talk much about my health in my personal life and this has been a way for me to open up to them about the challenges that sickle cell poses and how I deal with it.’’

While the battle with sickle cell has been trying for Dr. Frederick, he says that it has also been uplifting in some regards.

“My struggle with the illness has been a great opportunity in terms of developing my endurance and that challenge,’’ he says. “It has been a source of inspiration as I meet young people across the country who have sickle cell and who look at my life story with a very positive and uplifting attitude. I certainly felt I had a responsibility given the blessings I have had in terms of my health to do certain things to bring awareness to the country in terms of the lives of those who are living with sickle cell and also to bring some hope that there is a cure on the horizon.’’

Frederick was born in Trinidad & Tobago in 1971, a year after that country instituted mandatory testing for sickle cell. Even though he has lived with the disease his entire life, he has not spoken about it a lot publicly until now. He chose running 5K races as a means of speaking up in his personal fight against sickle cell because stamina and developing physical fitness have always been a challenge for him.

“I wanted to do something that represented a challenge in terms of something I would have to put some effort into to do,’’ he says. “Running a 5K or walking part of it would be a significant challenge. I thought I would give this a shot and run one a month as a symbol of making a sacrifice and at the same time bring an awareness that I was going to push my body to overcome the physical challenge it represents.’’

The campaign will culminate with the Howard Sickle Cell Center’s 13th annual Stomp Out Sickle Cell 5K walk in September. He’s keeping his time for his first two races to himself, but he does say he was pleased with his effort.

“I try to pace myself. I walk and run,’’ he says. “I’m not concerned about time yet. But I do have a bit of a competitive streak. I know I am going to push myself to get out there and push myself to get out there and do better. I’m going to keep my numbers to myself initially but my goal is to get my numbers down. I don’t have a goal in terms of time. I want to see improvement. I’m going to keep running throughout the year and complete this task. I have lots of friends and strangers who have stated they would love to join me, and people are making donations.’’

Frederick’s life has been negatively affected by sickle cell for as long as he remembers. Completing two 5K runs is a victory in itself.

“It’s been very strenuous,’’ he says. “I don’t necessarily have the stamina for running. My oxygen-carrying stamina is not as good as it could be, but I hydrate and try to pace myself. After the first two runs, I felt really good afterward. A little sore, but I felt really good.’’

Frederick recalls being hospitalized 3-4 times a year when he was growing up. He was an avid sports fan, and soccer was his first love. He played the sport but not competitively because of his condition. He also enjoyed running and being outdoors but he didn’t have the stamina required to participate competitively in any sport. Later, when he was a surgical trainee, he sometimes worked 100 hours a week, which would lead to a crisis.

Even at an early age, Frederick was determined not to allow his condition to hold him back. He says his grandmother tells the story of him overhearing a conversation she was having with one of her friends about his illness when he was three. He later approached her about what was wrong with him and wanted to know how he could get better. During that conversation, he decided he was going to become a doctor.

“That was the first inclination I had that something was different, that I had a challenge,’’ he says. “It was important for me to know and start dealing with my illness at early age. That was difficult. As a child you’re active. That’s where you learn to socialize; you learn social structure playing games and things of that nature. There were times I would push myself to the point I would fall out. But the reality of it was I learned very quickly that I wasn’t able to do those things. I was very much interested in reading. Being hospitalized and having to be still, reading was very comforting.’’

Frederick, a triple graduate of Howard – and he completed his surgical residency training at Howard University Hospital – says enrolling in Howard in 1989 opened up a new world to him. He discovered a student support group and for the first time met others who were afflicted with sickle cell. He learned what triggered the illness and how to hydrate himself to avoid having a crisis.

“Coming to Howard changed my life and the trajectory of my disease as well,’’ he says. “I gleaned from [those he met] how to cope with the affliction. I also got close to some who ended up passing. That was a stark reality as well. All of that was very insightful in terms of bringing me along. I owe a lot to Howard University and the Sickle Cell Center as well. It changed my perspective and changed the way that I saw my disease, and it gave me a way to not only work with my disease but to work in a way to overcome my disease.’’

Over the years Frederick has learned to manage the disease, and he says it doesn’t negatively impact his ability to perform his presidential duties.

Frederick hopes to send a message to a broad audience through Run to Cure Sickle Cell.

“My message is life has many challenges, and sickle is a major one if you have it,’’ he says. “But with those challenges are opportunities as well. Those opportunities with sickle cell teach you resilience, teach you courage and teach you the value of love. Lots of patients like me are surrounded by family members who are willing to be there and make sacrifices as my mom has and my wife and kids do now to make sure that I am in the best of health. While it is difficult at times, and it can be dispiriting, there is also a lot of hope. I think of my own journey. It puts to mind that I have a lot of support, a lot of love around me. I have been blessed to be able to achieve things that people that otherwise would have said I couldn’t achieve because I have sickle cell.

“My message to young people who have the disease and are living with the disease is to live with hope and to know there are potential cures. We have to get to as many people as possible. There is a message to those who are supporting those with sickle cell. That message is one of appreciation. There is a message those who simply don’t know as much about the disease. To let them know the disease does exist and people like me are living with the disease and trying to live as successfully as possible. The reality is that we need their support and we need them to be knowledgeable about the difficulties we have.’’