In making history as the first female president of New York Theological Seminary, Rev. Dr. LaKeesha N. Walrond said she hopes to lead the school to new heights and that her historic appointment will inspire others to shatter glass ceilings yet unbroken.

“There are so many things that excite me” in addition to being a pioneer in the position, Walrond said. 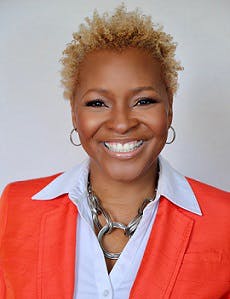 “This is not just any institution, but one that focuses on teaching people to minister to ‘the least of these’ in an urban context. I’m really excited to work with the community that is already there at the school to help the school be better than it has ever been to prepare students to serve those who are invisible to so many.”

Walrond starts June 3, succeeding Dr. Dale T. Irvin, who is stepping down but will continue teaching at the 119-year-old institution. She brings a range of administrative and leadership experiences, including more than a decade as executive pastor of First Corinthian Baptist Church, a megachurch in Harlem where her husband, Rev. Michael A. Walrond Jr., is senior pastor.

“I think it’s a good thing for her to be appointed not just because she’s a female, but because she brings a whole new kind of energy, which is reflected in the kind of ministry and the dynamic church that she and her husband have built here in Harlem,” said Dr. Obery M. Hendricks, Jr., an adjunct assistant professor in the religion department at Columbia University and former president of Payne Theological Seminary.

“As far as her being a woman, I think that will be very empowering to and attract a lot of women ministers or potential ministers,” said Hendricks. “It will be empowering to them and give them a frame of reference, along with her level of dynamism. So, I expect her to be a significant factor in growth of the seminary.”

It’s not Walrond’s first time being a first. The Texas native was the first woman to preach at her hometown church, where during her childhood women were not welcomed in the pulpit.

When she began matriculating at Spelman College as an undergraduate majoring in psychology, religion and higher education were not career interests. She planned to become a psychiatrist “to help others overcome their deepest hurts and their deepest fears, and to know that there is help and the best is yet to come.”

But she was so inspired by the college’s then-president, Dr. Johnnetta B. Cole, that her goal became to one day follow in Cole’s footsteps as president of the all-women HBCU.

“She was the first woman I heard talk not just about history, but ‘herstory.’ Not just heroes, but ‘sheroes,’” said Walrond.

So after graduating, Walrond went on to earn master’s degrees in teaching and school administration and a Ph.D. in special education and literacy, all from the University of North Carolina at Chapel Hill.

But her path took a different direction when she yielded to a divine call to ministry. To better equip herself for the new direction, she enrolled at Union Theological Seminary and earned a master of divinity degree.

At First Corinthian, Walrond focused on administration, staff supervision and ministry development, using educational and organizational strategies to maximize the church’s capacity and influence in the congregation, community and abroad. Prior to that, she held senior leadership roles at Zion Temple Church in North Carolina and Lakewood Elementary School in Durham, N.C.

Now, standing at the threshold of a job that combines ministry and presidency of an institution of higher learning, “it feels like a full-circle moment to me,” said Waldron.

“My hope is to work collaboratively with the faculty, staff, students and board members to make NYTS a world-renowned theological institution for preparing students for urban ministry,” she said. “The more I learn about the history of New York Theological Seminary, the more I appreciate its vision — not just for the future of theological education, but for societal matters including education for incarcerated people. The former administrations set a bar that I will strive each day to surpass, as I challenge myself and the NYTS community to make this historic and revered seminary greater and grander.”

Several praised Walrond’s selection as the right person at the right time.

Search committee chair and trustees vice-chair Jeffrey C. Slade said the seminary “is truly blessed to have found such a dynamic and well-prepared leader.”

Dr. Tamara R. Henry, assistant professor of religious education and a faculty representative on the search committee, predicted Walrond “will bring a fresh, bold and energizing approach to engaging theological education in the twenty-first century.”

Hendricks said Walrond brings expertise and an image that will resonate with the on-campus and external communities and bode well for the seminary.

Her leadership, he said, “is going to generate a lot of excitement.”