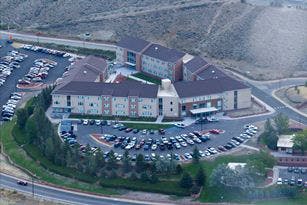 Many community colleges are offering student housing as a way to attract more students.

As a high school student in Tampa, Fla., Sheena Jackson fell in love with the University of Washington from pictures she saw on the Internet. When she was not accepted, she still wanted to go to the Seattle area for college. She decided to go to a community college — with housing — in that area so she could establish residency in the state and try later to get into the university.

“It’s in a big city,” Jackson says. “I needed a change and something that could challenge me that I could look forward to doing. I lived on the East Coast for most of my life. I wanted something new.”

So, four days after graduating from high school, Jackson and her parents drove from Tampa to Edmonds Community College in Lynnwood, Wash. — just 20 minutes from what Jackson calls her “star in the sky.”

She is part of a growing trend of young people who choose to go to community colleges with residential facilities as a bridge between living at home and getting an apartment or going to a four-year college. For some, community college is their first choice, and the two-year program fits their career goals. Others enjoy the low-cost housing and transferrable credits while preparing for their next move.

Community colleges are responding to the requests for housing. In 2000, 225 community colleges offered housing, by 2010 that number grew to 260, according to the American Association of Community Colleges (AACC). Now in 2012, 391 two-year institutions are providing a place to live, reports the National Center for Education Statistics.

One example of providing dormitories to increase attendance is Yavapai College in Prescott, Ariz. The community college is in a city with a population of 39,843, according to the 2010 Census. The school serves an area covering 8,000 square miles and provides three dorms with space for 375 beds, says Sarah Castro, director of residence life and judicial affairs.

“On-campus housing for our athletic teams is a big draw,” Castro says. “Our teams recruit internationally and having housing gives them some place to live.”

“Our county is pretty widespread,” she says. “We have students that are in our county or local area, but it’s still geographically far away. It’s convenient, so they don’t have to commute so far.”

Another school that offers housing because of its location is Tompkins Cortland Community College in Dryden, N.Y. It’s in a town that is four hours from New York City with a population of 14,435, as reported in the 2010 Census. The school offers seven residence halls with a total of 213 apartment-style units for 816 residents, says Darese Doskal-Scaffido, director of residence life and judicial affairs.

“The residence halls have definitely added to our enrollment and diversified our campus,” says Doskal-Scaffido, who recalls that the first residence hall opened on campus in 1999. “We have a global program, which draws students from all over the world, and we have a substantial population from New York City and surrounding areas. Additionally, the residence halls allowed our athletic programs to grow, as they were able to recruit outside of the local area.”

While schools in less populated areas offer housing to attract students, institutions in large cities are not as likely to have this concern. The Community College of Philadelphia, for instance, is in the fifth largest city in the U.S. Officials from the college said in a statement that the school “is an urban commuter school primarily serving city residents and has no plan to build student housing.”

If out-of-state students and commuters traveling from far away in their regions need a place to stay, then so do international students, many of whom are recruited athletes. For the 2011-2012 school year, the number of students from other countries attending community colleges in the United States reached 87,997, according to the Institute of International Education. That number increased from the 2005-2006 school year, when 80,851 international students studied at two-year colleges in the states.

A request for housing by international students was a motivation to have residence halls at Edmonds, which opened the first dormitory at a community college in Washington State in 1995, says Luke J. Botzheim, the school’s housing director. An estimated 55 to 70 countries are represented on campus. He added that Edmonds enrolls approximately 1,200 international students and believes that’s more than most institutions because Edmonds doesn’t require a high score on the TOEFL, or the Test of English as a Foreign Language, which measures listening, reading, writing and speaking.

Having so many different types of people living together can be challenging for communication, but also rewarding because students get the chance to meet people they never would have known.

Offering housing at Sierra College in Rocklin, Calif., is a draw to international students and young people who have been in foster care, says Jon Hamblen, manager of parking, security and residence life at the community college. This population fills most of the 144 beds in two residential halls at the school. He welcomes the variety.

“We were very vanilla,” Hamblen says. “The mixture of cultures brings the campus life, vibrancy and diversity. To bring diversity on campus is the absolute most enjoyable piece of what I get to do over here. To get all these groups together and have them understand who they are and value each other. That’s why I still have residence life in my title.”

The demand for housing on community college campuses and the need to upgrade facilities is fueling a boom in renovations and sometimes requires new construction.

In the winter of 2010, Casper College in Casper, Wyo. tore down a 380-bed building that stood for more than 30 years and replaced it in the following fall with a 450-bed modular complex, says Barb Meryhew, director of housing and student activities. To save time and money, parts of the new $23 million facility were constructed in Iowa and Colorado, then trucked to Casper.

At Yavapai College, Castro estimates it could cost about $15 million to build a new dormitory — without amenities. So the college won’t be rebuilding, but will renovate two residence halls this summer.

Edmonds’ residence halls are full for the fall and winter quarters, and students were asked to apply at a later date for the spring quarter, says Jackson, a resident assistant. However, the school has no immediate plans to build more residence halls, says Nicola Smith, dean for student life and development, but school officials did meet recently to discuss options for housing 50 more students.

One advantage to attending community college and living in a residence hall is the low cost of tuition and room and board, compared to costs at four-year colleges, “especially when students aren’t 100 percent sure what they want to do,” says Houchin of PWSCC. “They can work on general education classes, and it’s not a scary, long-term commitment.”

The average annual tuition and fees in 2011-2012 for public community colleges was $2,963, while a four-year college for in-state students was $8,244, reported the AACC. Likewise, students can expect to pay more for housing at four-year colleges. For example, if Jackson transfers to her dream school, the University of Washington, the cost to share a double room per quarter starts at $2,450, compared to $1,700 per quarter at Edmonds Community College.

The cost of room and board at a community college saves students money compared to living in an apartment off-campus, saves travel costs and helps repay the schools’ construction loans.

“Renting a two-bedroom new apartment in Casper, Wyo., is between $1,200 and $1,500 a month,” Meryhew says. On campus, each student pays $1,500 to live in a double room for a semester and the meal plans start at $1,130 per semester. Most community colleges include utilities and cable in their room fees.

Students spending money near campuses also benefits surrounding communities. In Rocklin, Calif., the local restaurants even accept the Sierra College’s dining cards, Hamblen says. The cards are good for up to $60 per week with four weeks of spending for meals loaded on each card.

Having students as residents requires increased lighting and security, campus officials says. “Now, lights are kept on around the residence halls at night and on weekends,” says Botzheim of Edmonds.

Since Casper’s new complex was assembled, key fobs are needed to enter the complex, security cameras are used throughout the building and stairwells, according to Meryhew, the housing director. Extra security personnel and cameras protect students and buildings. Community college residence halls have guidelines in place to make sure students are respecting the school’s property, themselves and each other. Each school has strict rules for drugs, alcohol and violence with disciplinary acts up to expulsion.

At Tompkins Cortland Community College in Dryden, N.Y., “the hours in the student center, library, tutoring center and athletic facilities have all increased over the years,” says Doskal-Scaffido, the director of residence life. “Our campus has become more of a residential center than a typical stop-in community college.”

– Marsha Gilbert is a freelance journalist whose work has appeared in several newspapers, magazines and websites.