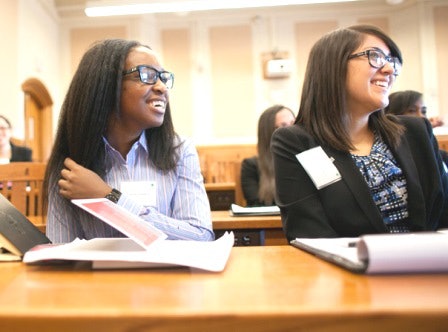 Experts are questioning whether American colleges and universities are putting in place the retention and student support services that will enable underrepresented minority students to succeed and graduate at the undergraduate level. (Photo courtesy of Cornell University)

By 2022, the proportion of Blacks and Latinos enrolled in U.S. higher education institutions will reach 33.8 percent of all enrolled students, up from 30.1 percent in 2011, according to the U.S. Education Department. Underlying this projected 12.3 percent jump in Black and Latino presence in American colleges and universities will be high school graduation rate increases as well as a higher education enrollment surge by Black and Latino students expected to outpace by more than three times the rate of enrollment increases by Whites and Asian Americans between 2011 and 2022.

In the “Projections of Education Statistics to 2022” report released last month, the U.S. Education Department projects that, between 2011 and 2022, Black and Latino enrollment growth will surge by 26 and 27 percent, respectively. During the same period, Whites and Asian Americans will each experience a 7-percent jump in higher education enrollment; enrollment by American Indians and Alaskan Natives are projected to remain at the same level over the 2011-2022 time period.

“The numbers of Blacks and Latinos going to college are increasing. And so that poses a significant question for our institutions of higher education about capacity,” said Audrey Dow, community affairs director for The Campaign for College Opportunity organization.

Dow notes that over the past few years U.S. and state high school graduation and undergraduate enrollment data, including the “Projections” report, have made it clear that Blacks and Latinos are increasingly completing high school and seeking college degrees. While enrollment data demonstrate that Blacks and Latinos are eager to attain postsecondary success, it’s critical to ask whether American colleges and universities are putting in place the retention and student support services that will enable these underrepresented minority students to succeed and graduate at the undergraduate level, she says.

“Do (American higher education institutions) have the capacity to serve this growing number of students? And … are they thinking strategically about how best to serve these students?” said Dow.

Overall, close to 3 million more people will be attending American colleges and universities in 2022 at all levels, including undergraduate and graduate programs, than were enrolled in 2011. U.S. higher education enrollment reached 20,994,000 in 2011.

The projected increase, however, will mean a slowdown in enrollment growth this coming decade in comparison to the last one. From 1997 to 2011, total college enrollments increased by 44.8 percent. Between 2001 and 2011, total higher education enrollment increased 31.8 percent, according to the report data.