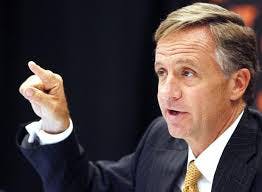 Gov. William Haslam says the Tennessee Promise allows students to cut the cost of their postsecondary education in half if they choose to get a four-year degree after completing community college for free.

When Tennessee Gov. William Haslam proposed legislation in February aimed at offering a free community college education for all graduating high school seniors in his state, Darius Green was quick to take notice.

Like many of the students in his class, Green, 16, a high school junior, was planning to enroll at the University of Tennessee, the state’s flagship institution.

But in the wake of the Tennessee legislature’s decision to pass the Tennessee Promise — a scholarship that will provide a tuition waiver for students to attend the state’s community and technical colleges beginning in fall 2015 — Green has reconsidered.

“You know how much money my family will be able to save over time?” asks Green, who will be the first in his family to go to college when he enrolls next year. “I’ve figured out that I can go to the local community college, get my associate degree and then transfer over to UT. I think this is a good opportunity for helping to increase college enrollment.”

As the cost of a college education continues to rise, Haslam’s legislation, which was approved in April in the state legislature, has generated interest across the nation and has education experts praising the Volunteer State for encouraging students to pursue college. Experts say that the new initiative may also help bridge the racial divide in Tennessee between the number of Blacks and Latinos versus Whites who enter college after graduating high school.

“We think generally speaking, this is good for our sector,” says David Baime, senior vice president for government relations and research for the American Association of Community Colleges. “It’s really an exciting development.”

While it’s too early to determine if other states will offer similar tuition waivers, Baime says that there has been a steady interest in the Tennessee model since it was first announced.

“The intention is clear,” says Baime. “This is part of the governor’s plan of higher education attainment, so it’s not a coincidence that the momentum is being built.”

Though Tennessee will be the only state to offer a free college education, it is not the first to do so. The California Community Colleges system was free until the 1984-85 academic year. And for a brief period in the 1970s, the City University of New York dropped all tuition charges, but was forced to begin charging students again due to mounting debt.

After he was elected governor of Massachusetts, Deval Patrick proposed a plan in 2007 that the state’s community colleges be free to all high school graduates by 2015. But as the economy fell deeper into a recession, his plan never gained much support in the state legislature.

Officials in the governor’s office estimate that about 25,000 students, or about 40 percent of graduates each year, will take advantage of the tuition-waiver program when it officially starts operating next year.

To cover the cost of the program, Tennessee will use lottery funds to create a $300 million endowment. The endowment will help to pay the annual $34 million cost of the program. The fifth semester allows for additional college work to accommodate the nearly 70 percent of high school graduates who currently require at least one remedial course upon enrolling in community college.

“The fact that they have made provisions to address remediation on the front end is very encouraging,” says Dr. Kenneth Parker, a D.C. education consultant who works with community colleges across the country. “The reality is that many high school students continue to lack the critical writing and thinking skills needed in order to be successful in college, so I’m thrilled that they’ve given a lot of thought to these issues.”

Student recipients are expected to maintain at least 12 hours each semester, earn at least a 2.0 GPA and complete a total of eight hours of community service in order to continue receiving the financial award.

According to Linda Gilliam, president of Northeast State Community College and a supporter of the initiative, students will be required to apply to the program, must attend an orientation, meet with a mentor and complete the FAFSA.

“Students don’t have to have any other entrance requirements aside from a high school diploma,” says Gilliam, who notes that first-generation college students like Green will most likely take advantage of the program.

Gilliam and others suspect that the Tennessee Promise will stimulate a spike in enrollment for community colleges across the state. In recent years, overall enrollment has dropped from 97,926 students in 2010 to 89,729 in 2013. Many of the state’s four-year private and public institutions have been struggling to maintain enrollment as well.

The Tennessee Promise is part of Drive to 55, a legislative campaign designed by Haslam to improve the state’s graduation rates from the current 32 percent to 55 percent by 2025. Haslam hopes this will improve overall job qualifications while attracting employers to the state.

“Through the Tennessee Promise, we are fighting the rising cost of higher education, and we are raising our expectations as a state,” says Haslam in an interview with Diverse. “We are committed to making a clear statement to families that education beyond high school is a priority in the state of Tennessee.”

Opposition and the future

While the legislation has received much support from state lawmakers, not everyone believes it’s a good idea.

“The governor’s ‘promise’ actually cuts funding from high-achieving students beginning four-year degree programs,” says U.S. Rep. Steve Cohen, a Democrat and a fierce critic of Haslam, who, during his years as a state senator, was responsible for spearheading a scholarship program for students enrolling in a bachelor’s degree program.

But Haslam says that after graduating from a community college, if a student chooses to attend a four-year school, the state’s transfer pathways program makes it possible for those students to start as a junior. By getting their first two years free, he adds, the cost of a four-year degree would be cut in half.

For Green, an honors student who aspires to become a teacher and has little interest in politics, Haslam’s thinking makes sense.

“I don’t know how anyone can be opposed to helping provide educational opportunities to kids of my generation, particularly Black students who need additional support,” says Green, who currently has a 3.9 GPA. “A person’s socioeconomic background really shouldn’t be the factor in determining who goes to college and who does not. To me, this is an attempt to level the playing field and make things more equitable for everybody.”

His working single mom, Patrice, agrees: “This is an opportunity for my son to get an education that I wished I had. College has always seemed like something that wasn’t possible for our family, but I think that’s about to change with this new program. I think it’s a really good thing.”