Society should not look down on Career and Technical Education — or CTE — and the federal government should encourage states and local school districts to do more to provide innovative programs that prepare students for technical careers.

That was the message that U.S. Rep. Virginia Foxx (R-N.C.) chairwoman of the House education committee, delivered Tuesday at the American Enterprise Institute, a conservative think tank. 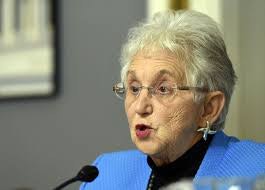 “These programs are helping countless men and women acquire the knowledge and skills they need to compete in the workforce and build fulfilling careers for the workforce but in order for the people to thrive we must do everything we can to change the way people think about CTE,” Foxx said.

She said society overvalues bachelor’s degrees and undervalues CTE and people who “work with their hands.”

“We have to get away from the notion that the bachelor’s degree equates with success, and with accomplishment,” Foxx said. She noted that CTE students at the high school level graduate at a rate of 94 percent — about 14 percentage points higher than their non-CTE peers.

Foxx said if she had her way, she would ban what she referred to as the “T-word.”

“The ’T-word’ is train … You train animals and you educate people, and so I want us to get rid of that word as we’re talking about people who are in programs for skill development,” Foxx said.

The Perkins Act has not been updated in more than a decade, Foxx said, and needs to be modernized to fit the new generation and their career paths.

Jarrod Nagurka, spokesman for the Association for Career and Technical Education, based in Alexandria, Va., agreed that the proposed bill “streamlines and updates the Perkins Act to better reflect today’s CTE ecosystem and the many innovative, life-changing programs that students are participating in every day.”

“The bill will make the application process for funds more effective by streamlining administrative requirements.” Nagurka said.  “This will allow districts to spend less time on paperwork and more time strengthening their CTE programs.”

The bill would bring more transparency and accountability by requiring programs to have clear and measurable goals, Foxx said.

She said society should not view CTE as a Plan B but as a Plan A.