On July 1 at midnight, the culmination of over a year’s worth of work will finalize as the Dabney S. Lancaster Community College (DLCC) in Clifton Forge, VA officially takes on its new name: Mountain Gateway Community College.

In all, five community colleges in the state have either already changed their names or are finalizing the process, completing a statewide movement sparked after the murder of George Floyd two years ago.

The Virginia Community Colleges System (VCCS) Chancellor Glenn DuBois wrote to each of his 23 college presidents in July 2020, asking them to conduct a thorough review of the names of their colleges, campuses, and facilities. That request was codified by the state board one year later with a new policy that institution names must reflect the inclusivity and diversity prioritized in the VCCS mission statement.

Across the VCCS system, which serves almost a quarter million students, 44% of the student population are minoritized populations. Many of the colleges were created and named over 60 years ago, “and some were named for people who represented a different time and very different values that are unacceptable in the current era,” said Jim Babb, internal communications manager at VCCS.

The idea of changing the names of beloved community institutions did not go over well with everyone. Litigation was even brought against the state board, arguing that the decision to rename the five colleges did not follow proper procedure. Babb said the board (and the colleges changing their names) have been straightforward and transparent, working with their communities on this process.

“There was resistance to changing the name,” said Rainone. “It was also this time that statues were being removed in Richmond, VA, and all over the country. The feel was, 'well, the name’s been fine for 60 years, why are we changing all of these things?'”

Resistance came from different corners of the DLCC community, including alumni, legislators, local elected officials, and even the living descendants of Dabney S. Lancaster himself. Lancaster was a former state education superintendent and president of Longwood University in Farmville, VA.

Originally, DLCC’s local board’s investigation of their namesake uncovered rumors that Lancaster supported segregation. But very little concrete evidence was found. So DLCC, along with Patrick Henry Community College, asked the state board if they could keep their names. The state board urged them both to take another look. For DLCC, that second look proved fruitful.

That discovery led to the local board’s unanimous vote to officially change their institution’s name.

Patrick Henry Community College asked for the state board approval on the addition of an ampersand in its name, to more clearly associate with the two counties they primarily serve as opposed to the founding father and slaveholder Patrick Henry. They have been officially known as Patrick & Henry Community College (P&HCC) for roughly a year. DLCC was the last of the five community colleges to get final state board approval of their new name in November 2021.

To find their new name, Rainone reached out to the community with a survey, looking for suggestions.

“We received 437 possible names. We wanted input on the decisions made, and we wanted to be as inclusive as possible,” said Rainone.

Through a long process, the institution whittled name options down to a final five, and eventually, Mountain Gateway Community College was selected.

An institutional name change requires dedicated and tedious effort. A long list of at least 400 to-do items, contained, updated, and tracked in an Excel spreadsheet, helped the institution timeline the larger projects, like the coordination with the Department of Transportation to change highway signs. Rainone estimates that 99% of external facing names will have been changed by or on July 1, but even after an exhaustive list making process, they are still discovering little, internal changes that will need to be made.

Randy Ferguson, media director at P&HCC who worked on updating the school’s graphics, said that his job was simpler than other colleges who had to do entire overhauls of logos. Since P&HCC has worn its new name the longest, Ferguson said the vocal outrage at the change “calmed down pretty quickly.”

After spending so long on this project, Rainone said he and many on his staff are looking forward to bringing this process to a close. He’s now keen to share his experience with other institutions looking to take the same kind of steps for inclusivity.

“Number one is you’ve got to have the vision. People hate change. You have to explain the change and the reasons behind that,” said Rainone. “I said from the beginning, if the name of our college offended even one individual who wouldn’t come to our college for their needs, then I think that’s a problem. We are the community college, and we need to serve that.” 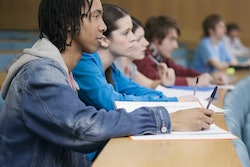