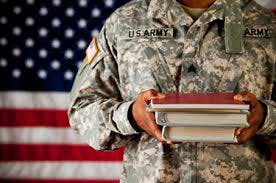 In fiscal 2012, approximately 300,000 service members participated in the tuition assistance program, according to sponsors of an amendment to restore the program.

When the U.S. Marine Corps announced that it was cutting its tuition assistance program as a result of “sequestration,” Cpt. Martin Cawdery sat down with his wife to go over their monthly budget to see if he could afford to continue his master’s degree studies at Webster University.

Among other things, the MTAP plan offers service members a grant covering up to $250 per credit hour to replace the suspended tuition assistance funds, according to the university.

“I was elated because I really wanted to continue my education, but we were going to have to make some significant cuts in our savings and just cut back on doing things with my family, whether dinner or a movie,” said Cawdery, who had been relying upon the tuition assistance program for the past year and a half, using it to the maximum at $4,500 per year.

“I could make some adjustments within my budget and still squeak it out,” said Cawdery, who is 35. “But the young enlisted folks, there’s no way. They would either have to quit school or finance it through student loans or would have to tap into their G.I. Bill.”

Cawdery said some service members may be reluctant to use their G.I. Bill because the post 9/11 G.I. Bill is transferrable to dependents.

Webster University is one of at least a handful of universities that have stepped up to offer enlisted members all or some of the tuition assistance they lost as a result of cuts to the Department of Defense. The cuts were part of $85 billion in federal cuts that went into effect March 1 as a result of “sequestration,” the term used for the across-the-board cuts that were imposed because of Congress’s 2011 failure to reach a $1.2 trillion deficit reduction deal.

According to Hagan’s office, in fiscal 2012, service members who were enrolled in tuition assistance programs earned more than 50,000 degrees, diplomas or certificates. The recent decision to cut the program exempts those already receiving aid, but prevents service members from submitting new requests for the assistance, Hagan’s office said.

The significance of the impact of the elimination of the tuition assistance programs for members of the military has not gone unnoticed in the higher education community.

Earlier this week, the American Council on Education and 12 other higher education associations sent a letter to Defense Secretary Chuck Hagel, asking him to reconsider recent decisions by most branches of the military to suspend their tuition assistance programs.

“TA benefits are an important investment in members of the military and their ability to contribute to the defense of our nation,” the letter states. “While we appreciate the many considerations that must be taken into account as you implement the sequester, we respectfully ask that you reconsider the decision to eliminate new TA benefits.”

Despite the inability or unwillingness of the federal government to restore the funds, some institutions of higher learning, such as Webster, took the lead on offering assistance to enlisted members to make up for the loss.

Besides Webster, Touro University Worldwide (TUW) announced recently that it would offer several financial assistance options to military students in the wake of the elimination of the TA programs. Those options include one free course to all military students who submitted paperwork by March 15, and reduced costs for military members for certain programs, such as the Bachelor of Science in Business Administration or Masters in Media and Communications Psychology.

At Webster, the MTAP plan went into effect March 15.

“We held an executive meeting and determined the right thing to do was to form the Military Tuition Assistance Protection program, or MTAP,” Callan said.

Michael Dakduk, executive director of Student Veterans of America, said education for enlisted members helps them rise within the ranks, and once they reenter civilian life.

“When you’re in the service, going to school is often a path to promotion,” Dakduk said. “This [elimination of tuition assistance hurts the promotional prospects of many military service members, and it hurts for the folks that are going to be transitioning out because they had an opportunity to build a foundation for gaining college credits prior to transitioning out of the military.”

Cawdery said he believes the master’s degree he is seeking in management and leadership will help him rise within the ranks, and once he leaves the military.

“It’s helping me to become a better leader. As I move up in the ranks, I’ll be more prepared to deal with some of the challenges I’ll face,” Cawdery said. “And when I get to the point where I retire, it will open more doors for me when I seek employment.”