Schools Engage Their Campus Communities with March on Washington Events 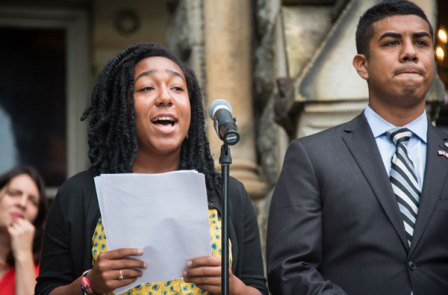 Amanda Wynter (C’14) reads an excerpt from “I Have a Dream” as Adan Gonzalez (C’15) stands by. (photo courtesy of Georgetown University)

COLLEGE PARK, MD. – With President Barack Obama delivering a globally-televised speech Wednesday to commemorate the 50th anniversary of the March on Washington for Jobs and Freedom, dozens if not hundreds of colleges and universities organized tributes to mark the most inspiring event in the American civil rights movement.

Recalling how the “soaring oratory” of Dr. Martin Luther King Jr.’s “I Have a Dream” speech “gave mighty voice to the quiet hopes of millions … [and] offered a salvation path for oppressed and oppressors alike,” Obama praised the late civil rights champion for the leadership he presented to the nation.

“His words belong to the ages, possessing a power and prophecy unmatched in our time,” the president said.

At the University of Maryland, College Park, the March on Washington anniversary led administrators to invite members of the university community to reflect on the impact of the civil rights movement in its MKL50: “I Have a Dream” program. Utilizing the Chapel Garden of Reflection and Remembrance, which includes a labyrinth, university employees and students undertook guided labyrinth walks while listening to music from the civil rights era on Wednesday afternoon.

“We thought university staff and students would appreciate commemorating the march by taking a thoughtful and meditative approach to it,” said Denise McHugh, coordinator of the university chapel.

Brandon Dula, assistant director of the Adele H. Stamp Student Union for Multicultural Involvement and Community Advocacy [MICA] at the University of Maryland, said that, since King’s day, college and university campuses have become places at which civil rights history and ideals are highly relevant for students learning to thrive in a diverse society. MICA and the university chapel co-sponsored the MKL50: “I Have a Dream” event.

“Organizations such as MICA across the country are doing the same thing in terms of getting students to reflect on recent historical events that have impact today,” said Dula. “We naturally want to discuss and learn what went on in the past. … It’s really a teaching moment.”

Similar to how institutions throughout the world celebrated the march anniversary, the University of Maryland chapel bells chimed at 3 p.m. Wednesday, marking a half-century to the minute when King delivered his speech.

The bells of Healy Hall at Georgetown University sounded loud and clear as students and members of the Georgetown community observed the March on Washington anniversary during the school’s “Let Freedom Ring” program.

“Today, we remember a dream that was meant not simply for a day, a year, or a decade but for decades to come, including for us here,” said the Rev. Kevin O’Brien, S.J., the Georgetown vice president of mission and ministry.

“And it’s fitting at the nation’s oldest Jesuit and Catholic university that we pause on the first day of classes to reflect on the meaning of King’s dream for all of us because this is a dream that is both holy and very human,” he added.

Following the chiming of the Healy Hall bells, a group of seven undergraduate students read selections of King’s notable speech before an audience at the building’s steps.

“It is fitting that this anniversary occurs on the first day of our academic year, as we introduce our newest students to our way of life here at Georgetown,” John J. DeGioia, Georgetown president, said in a statement.