Career-based courses that function like a virtual apprenticeship could be the answer to cultivating a diverse STEM workforce, an IBM executive said Wednesday.

“Our technology is changing so fast and there are many individuals who have been left out of the workforce because technology hasn’t been something in their background, but they’re wonderful, committed individuals,” said Lilian Wu, program executive for Global University Programs at IBM. 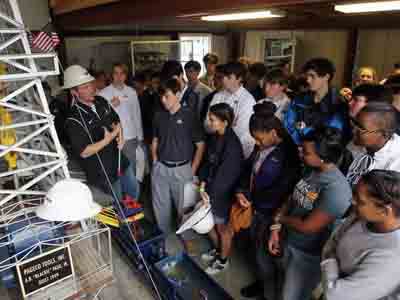 “How do we retrain and retool those individuals so they can be contributing members of society?”

As one potential solution, Wu touted a set of career-based courses for various jobs that IBM developed. Wu said IBM is looking for various partners and universities to deliver the courses.

“I think they may be kind of a model where we could complement the university education,” Wu said, adding that the courses could give students a hands-on sense of what it’s like to work in various “hot jobs” in the IT sector, such as a cloud administrator.

The courses were first introduced in Africa and the Middle East — where Wu said there is a large population of young people who “don’t have a very pervasive excellent two- or four-year education system.” Wu said IBM saw a need for such courses to be delivered — with some tweaks — possibly as an elective or as an add-on in American colleges and universities.

Wu revealed IBM’s plans for the courses Wednesday at the “Summit on the Intersection of Higher Education and the Workforce: Broadening the Role of Business in STEM Transfer and Persistence.” The event was led by the Business-Higher Education Forum, an organization of CEOs and college presidents that focuses on better alignment between higher education and the workforce, and hosted by the National Science Foundation.

Many speakers — including Wu — stressed the need for higher education and business to collaborate to build a diverse workforce. Wu said it’s important for colleges to produce graduates who are not just well-versed in one subject but who are also “broad across the top” in order to help corporations, such as IBM confront complex challenges in a given societal context. As an example, she cited the need to make mines safer for workers in different parts of the world using sensors.

“To be able to take those societal contexts and be able to talk to many different kinds of individuals and communicate complexity as a technical person, it’s very important for us to have a very diverse workforce and a workforce that can communicate well and collaborate well,” Wu said.

Much of the summit focused on best practices and ways to engage students in ways that lead to graduation and employment.

Terrel L. Rhodes, vice president in the Office of Quality, Curriculum, and Assessment and executive director of VALUE — an acronym for Valid Assessment of Learning in Undergraduate Education — at the Association of American Colleges and Universities, said it’s important for students to feel like they belong.

“It’s not what their SAT scores were. It’s not so many other factors,” Rhodes said. “One of the key factors is: Do they feel like they belong?”

Rhodes also stressed the importance of giving students opportunities to “engage in the work they want to do” so that they can be seen — and see themselves — in a different light as opposed to being seen students with barriers to success.

“Our students need to see themselves in what they’re interested in and what they’re passionate about,” Rhodes said. “It’s less about what we do other than give students opportunities and guide students in pursuit of the things they have a passion for.”

“We have to do more than connect with secondary and universities,” Peppard said. Instead, she said, businesses need to “reach down” to work with elementary and middle school students in order to excite an interest in STEM, particularly among girls and students from underrepresented groups.

“So many young girls do not see themselves as scientists and engineers, and it’s critically important for underprivileged children who don’t think they have the acumen to develop, it’s important that we do something about that,” Peppard said.

She touted a series of initiatives that Northrop Grumman has launched — including a “Fab School Lab” contest for schools to win up to $100,000 to upgrade their science labs — as examples of what businesses can do to excite more students’ interest in science.

Peppard also cited the need for more female engineering instructors at the university level so that female college students can see themselves reflected in the field.

“It’s important to engage at all levels to cultivate diverse and rich talent pipeline,” Peppard said.