WASHINGTON – Parental education is a major factor in an undergraduate student’s decision whether to pursue an advanced degree, and it may be an impediment to Black, Hispanic and first-generation populations, according to a study by Gallup, the Association of American Law Schools and the Law School Admission Council (LSAC). 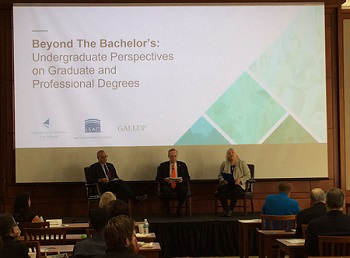 The three organizations presented that finding and more when they unveiled a study report Tuesday in a briefing session at the Gallup office. The report, “Beyond the Bachelor’s: Undergraduate Perspectives on Graduate and Professional Degrees,” was based on information gathered from 25 four-year institutions of higher education, where 22,189 students responded to a Gallup survey about academic backgrounds, career aspirations and sources of advice and information.

Still, the study produced “a very rich set of data” that shed light on demographics such as gender, race and ethnicity, parental education and academic achievement that can be used to bolster access and equity, noted LSAC president and CEO Kellye Testy.

Highlights from the study:

· In terms of race and gender, the pool of undergraduates likely to pursue an advanced degree was more diverse than the pool of those unlikely to do so.

· Among undergraduate students most likely to pursue an advanced degree, Asians comprised 16 percent, followed by Hispanics (13 percent) and Blacks (8 percent).

· The master’s degree was the most sought-after graduate credential, followed, in order, by Ph.D., MBA, JD and MD. Black, Hispanic and Asian students were more likely than White students to consider an MD.

· For the JD and PhD, in particular, students with at least one parent with an advanced degree were significantly more likely to consider one of those degrees than were undergraduates whose parents did not have a college degree.

· Of respondents likely to pursue an advanced degree, the top reason was passion or high interest in their work (49 percent) followed by other main motivators, such as high pay (37 percent) and opportunities to advance in a field (33 percent).

Other key research finding revolved around student access to information about advanced degrees.

Further, Hispanic, Asian and Black students considering an advanced degree were less likely than their White peers to report seeing or receiving information on any advanced degrees, especially first-generation students in those groups.

Those findings suggest opportunities for professors, advisers and others at schools to be more intentional about ensuring that all students are aware of information and costs and how those factors intersect a student’s interests and possible career options. Students cited professors and academic advisers as key influencers in terms of whether or not to seek an advanced degree. 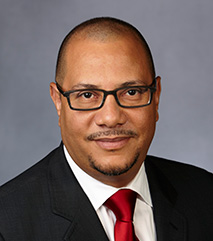 The large sample population and response rate reduced the study’s margin of error to plus or minus 1 percent, said Dawn Royal, an advanced design and analytics specialist at Gallup.

The study is important because of the light it sheds on factors influencing decisions to seek advanced degrees, which contribute to higher socioeconomic status and upward mobility, noted Kent Syverud, president and chancellor of Syracuse University, who discussed the findings as part of a panel.

“This is the first study I have seen anywhere that comprehensively addresses how and when and why undergraduates consider graduate school,” he said.

Using the data to focus efforts on helping undergraduates, especially first-generation students, know and understand options for advanced degrees is vital, Syverud added, “if you care about our colleges being engines of upward social mobility.”

He and another panelist, Dr. John Valery White, the Ralph Denton Professor of Law and former provost of the University of Nevada, Las Vegas, pointed out opportunities for college counselors, advisers and mentors to help underrepresented groups see opportunity and gain access.

At a time when college campuses are more racially diverse and have more low-income students, White said, the “disturbing gaps” in how information about advanced degrees reaches students underscore challenges that schools must meet to help all students see paths to graduate education.

The access to less information about graduate programs that Black students self-reported is particularly disturbing, White added, and “may relate to a sense of alienation on campus that I think we should worry about.”

Data from the same survey was used in the report “Before the JD: Undergraduate Views on Law School,” which the collaborating organizations released in September.