Dr. Shaun R. Harper, a prominent education researcher whose work on race, equity and inclusion has catapulted him to the top of his field, has been voted president-elect of the American Educational Research Association (AERA).

Harper, who is the founding director of the USC Race and Equity Center and the Provost Professor in the Rossier School of Education and Marshall School of Business at the University of Southern California, will take the helm of the largest national interdisciplinary research association devoted to the scientific study of education and learning in 2020.

He will succeed Dr. Vanessa Siddle Walker, the Samuel Candler Dobbs Professor of African American Educational Studies at Emory University, who will assume the AERA presidency at the close of the Association’s annual meeting in Toronto next week. 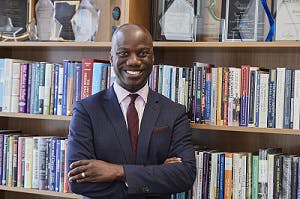 “I have deeply admired Vanessa Siddle Walker, the incoming AERA president, my entire career,” said Harper, who also holds the Clifford and Betty Allen Chair in Urban Leadership at USC. “Being elected to serve as her successor is beyond exciting for me. I will surely benefit from her wisdom and superb example.”

Harper said that a friend sent him a picture of actors Angela Bassett and Chadwick Boseman from a scene in Black Panther as a visual representation of “Vanessa’s and my back-to-back AERA presidencies.”

“I think that’s right,” he added. “It’s like that time that my best friend Lori Patton Davis and I were consecutively ASHE president.”

Indeed, during his tenure as president of the Association for the Study of Higher Education (ASHE), Harper was lauded for his efforts to reenergize the 43-year-old organization.

“My ASHE presidency gae me a glimpse into how one leader and one conference can engender sustainable shifts in the field and inspire colleagues to approach their work with a greater sense of purpose,” he said. “I want to do that again, but this time on a larger scale through AERA.”

Dr. James L. Moore III, Vice Provost for Diversity and Inclusion and Chief Diversity Officer at The Ohio State University said that he is excited about Harper’s presidency.

“Dr. Shaun Harper is one of the towering education researchers and thought leaders in the United States,” said Moore, who is also the executive director for the Todd Anthony Bell National Resource Center on the African American Male and the Education and Human Ecology Distinguished Professor of Urban Education at OSU. “I am confident that Dr. Harper will help advance the organization on important educational research topics related to diversity, inclusion, and equity. These are all topics that closely reflect his research agenda.”

Harper said that he was motivated by a number of past AERA presidents like Drs. Linda Darling-Hammond, Gloria Ladson-Billings, James A. Banks, William Tate, Andy Porter and Vivian Gadsden “whose superb examples inspired me to stand for election.”

“If I am even half as good as they were, my presidency will be a huge success,” he said. “I will work as hard as I possibly can to honor theirs and others’ presidential legacies.”