Billionaire Promises to Pay Off Student Debt for Morehouse Graduates

Billionaire investor Robert F. Smith has promised to pay off the student loan debt for this year’s graduating class of Morehouse College.

“My family is going to create a grant to eliminate your student loans,” Smith told the nearly 400 students and their families at commencement on Sunday, where he received an honorary degree from the nation’s only Black college for men, alongside actress Angela Bassett and psychologist Dr. Edmund W. Gordon. 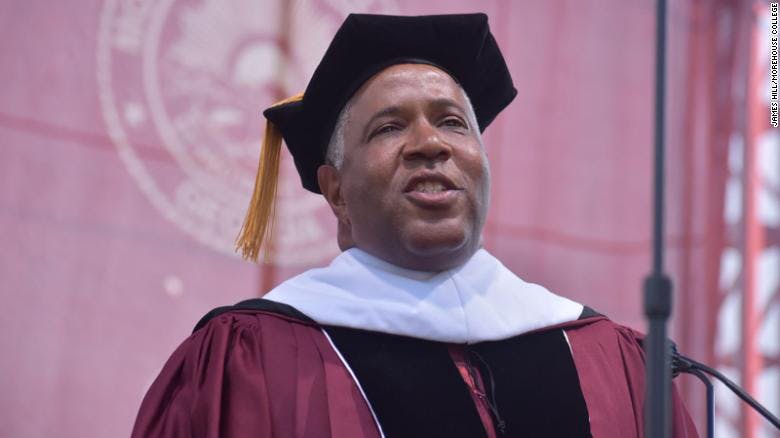 “I will never forget that my path was paved by parents, grandparents and generations of African-Americans whose names I will never know,” said Smith, who founded Vista Equity, which invests in software, data and technology companies.  “Their struggles, their courage, and their progress allowed me to strive and achieve. My story would only be possible in America, and it is incumbent on all of us to pay this inheritance forward.”

It is unclear when Smith, 56, will  begin helping to pay off the student loan debt, which amounts to about $40 million, according to college officials. The current annual tuition at Morehouse is about $27,000.

In his address to the graduates, Smith challenged them to make a difference.

“I’m putting some fuel into your bus,” he said. “I’m counting on you to load up the bus.”

His remarks were echoed by Bassett, who reminded the students that they hailed from a strong lineage of civil rights leaders like Dr. Martin Luther King, Jr., who graduated from the private, Atlanta institution in 1948. Still, Bassett said that the graduates should be unafraid to chart their own path.

Dr. Robert T. Palmer, an associate professor and department chair of Educational Leadership and Policy Studies at Howard University, said that Smith’s action is life changing for the graduates.

“While philanthropists have donated money to college and universities before, it has mainly been for the construction of new buildings, fostering new degree programs, and the creation of scholarship opportunities,” said Palmer, an expert on HBCUs. “Robert Smith’s gift totaling $40 million is unprecedented in that it will clear the total loan debts these young men incurred for their education at Morehouse.”

Palmer said that when rapper Dr. Dre and record producer Jimmy Lovine donated $70 million  to the University of Southern California several years ago, the donation drew widespread condemnation from many prominent HBCU leaders who felt that the money would have been more beneficial for their institutions.

“In their outcry, they urged more Black wealthy families and individuals to support HBCUs,” said Palmer. “I hope Smith’s gift will inspire and encourage other wealthy families to do just that.”