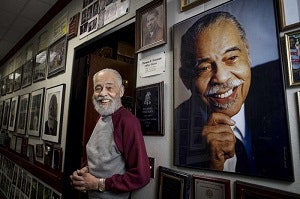 In introducing Freeman to the crowd at NSDA nationals at the award presentation ceremony, Byron R. Arthur, a member of the NSDA board of directors, noted that Freeman has been teaching in one way or the other since 1947 and counts among his former students Dr. Martin Luther King Jr., who he taught in a theology class at Morehouse College, former members of Congress George Thomas “Mickey” Leland and Barbara Jordan, and gospel artist Yolanda Adams. Arthur said that these were among a “lengthy list of students he taught about being men and women who would use their gifts to create meaningful change.”

Freeman also coached two-time Oscar winner Denzel Washington and the cast of the film “The Great Debaters”, which chronicled the exploits of Professor Melvin B. Tolson and the debate team at historically Black Wiley College. According to Arthur, Freeman said the most important thing he taught Washington and the other Great Debaters cast members was, “The truth always prevails.”

In a news release, NSDA noted that the National Speech & Debate Tournament draws high school and middle school speech and debate competitors from across the country and is the largest academic competition in the world. Its competitors represent the top 4% of more than 150,000 student members at approximately 3,500 schools.

Freeman’s comments were squarely aimed at the students in the audience as he accepted the award.

“While this is an occasion for honoring those who have done the hard work to make this activity a success, the challenge that comes from this kind of activity is not to those who are being honored, but to the young people who are taking advantage of the training that you have and are continuing to give to them,” Freeman said. “For this really is not our night, this is their night. And may they leave here inspired by what they have seen and heard.”

Freeman added, “So we go forth with hope in our hearts that you will so labor that government of the people, by the people and for the people will not perish from this earth.”