A commitment to diversity, equity and inclusion has long been a part of Dr. Araceli Frias’s DNA.

“Part of me really feels that I was probably meant to always do this type of work,” says Frias, who is assistant dean for diversity in the Graduate School at the University of Utah, a post that she has held since 2015. 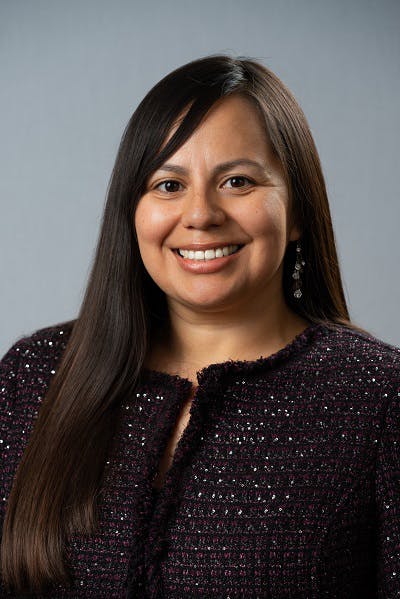 “One of my first decisions as assistant dean for diversity was to implement monthly socials,” says Frias, adding that these networking opportunities provide students with an opportunity to build community and lean on each other as they confront the struggles of being a graduate student.

In this role, Frias has been widely credited with growing the University of Utah Graduate School Diversity Office, expanding its reach and how it works with underrepresented students enrolled in 51 of the more than 200 graduate programs at the public research university that is bigger than some small U.S. towns.

Since her days as an undergraduate at Eastern Washington University (EWU), Frias has been passionate about diversity, equity and inclusion efforts. Back then, she was active in the Chicano Education Program and the McNair Scholars Program, which works to increase the number of Ph.D.s earned by first-generation, low-income and racially underrepresented students.

Later, as a master’s student at EWU, Frias held an assistantship in the president’s office where she helped to build a framework for a retention program aimed at first generation students.

It was during those years that Frias had an epiphany.

With an undergraduate and master’s degree in psychology, Frias enrolled in a doctoral program in cultural studies and social thought at Washington State University. She wanted to “figure out ways to address race and ethnicity in education research.”

Still, her experience as an underrepresented doctoral student was not easy.

Like many graduate students, she experienced isolation and depression and struggled with the rigors of graduate school.

“I received my affirmation, my validation from reading research on the experiences of underrepresented doctoral students,” says Frias, who went on to incorporate the narratives of underrepresented graduate students into a curriculum for graduate school preparation. Her dissertation, “Reconceptualizing Graduate School Preparation: Examining Undergraduate Scholars’ Responses to a Critical Race Curriculum,” enabled Frias to pilot a program for underrepresented students who wanted to pursue graduate studies. Frias describes the years she spent in the field of diversity, equity and inclusion as invaluable preparation for the job she now holds. At the University of Utah, Frias says she remains focused on recruiting and retaining underrepresented students, advocating for their needs and launching the first Graduate Student Diversity Council.

Her office offers Graduate Diversity Enhancement Grants — mini grants that support initiatives or projects that advance the professional development and/or retention of underrepresented graduate students. “I didn’t want to step into this role and pretend that I know what the needs of all graduate students are, so this diversity grant is a great way for programs to get some money to launch those initiatives and address those needs specific to their context,” says Frias.

Considered a rising star in academia, Frias has created the McNair Scholars Graduate Network, made up of alumni scholars pursuing doctoral degrees at the University of Utah. Outside of the university, Frias is active in a number of organizations, including the National Association of Diversity Officers in Higher Education, the American Educational Research Association and the Council of Graduate Schools, where she is a member of its Diversity and Inclusiveness Advisory Committee. She also has participated in the HERS Institute, a two-week comprehensive leadership program to advance women in leadership.

Looking forward, Frias says that she is planning to study the effectiveness of a new recruitment approach that focuses on building relationships with minority-serving institutions. She is interested in jumpstarting a national conversation on developing a Graduate Student Bill of Rights. The bill would focus on institutional practices, policies and grievances that “threaten these students’ degree attainment.” Frias also remains focused on collecting demographic data about the graduate students at her university.

“Are our policies sufficient for supporting graduate student success? And if not, where are the gaps?” Frias asks, noting that she has recently hired an assistant director and hopes that she’s able to expand her team even more in the future.