Morgan State University’s marching band “Magnificent Marching Machine” has been chosen to represent the state of Maryland and perform in the 2019 Macy’s Thanksgiving Day Parade in New York. This will be the band’s first time performing in the parade. 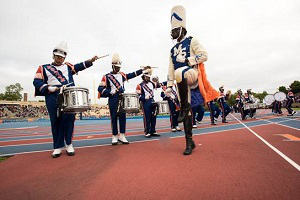 The Macy’s Parade Band Committee annually searches for bands that have a good stage presence, and musical and marching talents to entertain millions of live audience members and TV viewers.

“The Magnificent Marching Machine and the students that make up its members are recognized nationally as a model for musical excellence and exuding that essential ingredient for what is known as that ‘Ole Morgan Spirit,’” said Melvin Miles, director of Morgan State University bands. “Today, we are proud, honored and excited to be participants in one the world’s greatest parades-Macy’s Thanksgiving Parade and to be given this wonderful opportunity for our band to present its ‘High Stepping’-show style to the world. There is not a greater stage than the Macy’s Thanksgiving Day Parade.”

The Magnificent Marching Machine was chosen from more than 100 applicants as one of nine bands to perform in next year’s Macy’s Thanksgiving Day Parade. The band will spend the next year practicing and planning for their performance.