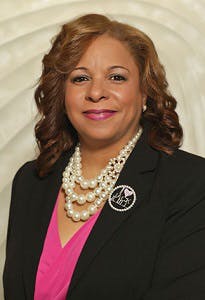 Jack and Jill of America, Inc. has elected Danielle Brown as its 26th national president, according to a press release issued by the organization.

As a child, she Brown was a member of Jack and Jill.  As a mother, Brown joined the organization’s Alexandria Mount Vernon chapter in Virginia in 1998 and later moved to the Loudoun County, Virginia chapter which her mother helped establish. Brown is a graduate of George Mason University.

The announcement was made in July at the organization’s national convention in Missouri. Jack and Jill of America, Inc. is in its 80th year.