As a result of Sen. Susan Collins R-Maine voting to confirm Supreme Court Justice Brett Kavanaugh in the beginning of October, faculty and alumni from her alma mater are requesting St. Lawrence University rescind her honorary degree from the institution.

Over 1,800 alumni and faculty members have sent letters to university officials asking for her honorary degree she received by the university in 2017 be taken back. More than 1,300 St. Lawrence alumni co-signed a letter saying they believe Collins’s confirmation of Kavanaugh doesn’t follow the core values of the university, according to CBS News. 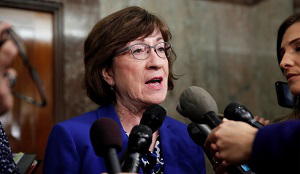 Collins graduated from the university in 1975 and received the honorary doctorate of Human Letters to honor her opposition of GOP attempts to repeal the Affordable Care Act, but after voting yes for Kavanaugh’s nomination for Supreme Court Justice, shows a lack of “integrity and commitment to justice that we expect from the St. Lawrence body,” the letter read.

A letter co-signed by over 20 St. Lawrence faculty argues that taking her honorary degree back isn’t a political matter, but would rather help “dismantle rape culture”.

“While our campus has come a long way in the years since Senator Collins was a student here to educate the campus population about sexual assault and harassment, and to adjudicate it fairly when it happens, we still have much hard work before us in and outside of the classroom,” the faculty letter read.

University spokesman Ryan P. Deul said in a recent statement that the university has never revoked any earned or honorary degree, “and it has no intention of doing so in this situation.”