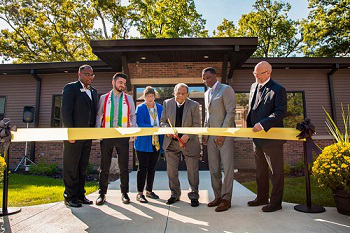 Andrew Young, center, cuts the ribbon at the center.

A dedicated space in northeast Indiana for discussions about diversity and inclusion, civic engagement and civil discourse has been created in honor of the late wife of civil rights legend Andrew Young.

Young, 86, attended the recent dedication of the Jean Childs Young Intercultural Center and its domed Toyota Round at Manchester University, home of the world’s first undergraduate peace studies program and the last campus to host a speech by the Rev. Dr. Martin Luther King, Jr.

The building in North Manchester is named for Mrs. Young, a 1954 Manchester graduate who earned a degree in elementary education and became known internationally as an educator and advocate for children’s rights. Her experience at Manchester, her husband said, helped shape her views, which in turn had a profound effect on him, their family and the many lives she touched.

“Jean pushed me to understand the implication of nonviolence in everything that we do. And I never forgot those lessons,” he said at the dedication ceremony.

She was a staunch advocate for human rights and children’s welfare. President Carter appointed her chair of the U.S. Commission of the International Year of the Child in 1977. She established the Atlanta Task Force on Education, co-founded the Atlanta-Fulton Commission on Children and Youth and helped develop Atlanta Junior College.

Manchester was founded by the Church of the Brethren, a historic peace church. Weeks after graduating the university, Jean Childs married Young, who would remain at the side of King, a close friend, throughout the civil rights movement. Young later became a U.S. congressional representative, ambassador to the United Nations and mayor of Atlanta.

At the recently opened center, the university’s Office of Multicultural Affairs has hosted discussions about stereotyping, discrimination against the disabled, pressures on masculinity, and the NFL and freedom of speech.