Chick-fil-A No Longer an Option at Rider University

After polling its student body about what restaurant they wanted on campus, Rider University, a private institution located in central New Jersey, removed Chick-fil-A as an option based on the restaurant being “widely perceived to be in opposition to the LGBTQ+ community.” 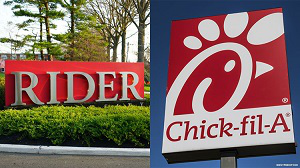 Rider administrators sent a letter to the campus community stating that they intended to be fair in “balancing the desire” to offer sufficient on-campus dining options while also “being faithful to our values of inclusion.”

“The choices in this situation, like in so many others, were imperfect,” administrators wrote in the letter. “They challenged us to reflect on our values and consider what kind of community we want to provide for those who live and learn at Rider University.”

The restaurant chain created controversy back in 2012 when its president made several comments against same-sex marriage stating that Chick-fil-A supported “the biblical definition of the family unit” according to NBC News.

On Monday, a representative for Chick-fil-A said that the company does not have “policy of discrimination against any group, and we do not have a political or social agenda.”