Ruth E. Carter, an alumna of Hampton University, won the Oscar for Best Costume Design on Sunday night for her creative work in the movie “Black Panther”.

“I can’t say enough about how the pageantry of the film has connected with people in such a beautiful way,” Carter, 57, told NBC News a month after the film was released in 2018. “People want to honor themselves, they want to honor culture, they want to honor Africa. They just want to be happy to be who they are, not trying to be something they aren’t.” 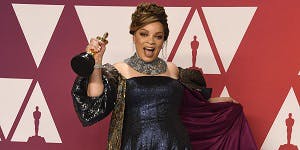 With more than 30 years of experience working in the entertainment industry, Carter was the first African-American costume designer to be nominated for an Academy Award, according to ABC-affiliate station WTVR.

Carter was up against the costume designers for the films “The Ballad of Buster Scruggs,” “The Favourite”, “Mary Poppins Returns” and “Mary Queen of Scots”.

Carter recently returned to the Hampton Roads area, as she delivered the 148th commencement address at Hampton University in May 2018.