Dr. Kevin James, the new interim president of Morris Brown College, began his tenure Friday following an earlier announcement of his appointment this week from the historically Black college’s (HBCU) Board of Trustees. 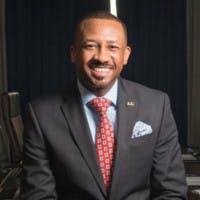 A Columbia, S.C. native, James comes to Morris Brown after previously serving as interim CEO of the 100 Black Men of America, Inc. He brings to the Atlanta-based institution expertise from years of experience as a higher education administrator, business leader and motivational speaker.

“I am honored to have been selected by the board to serve at the helm of Georgia’s oldest HBCU founded by Black people,” James told the Atlanta Daily World. “I look forward to working with the board of trustees, alumni, staff, and other shareholders to resurrect this historic college back to prominence. My first order of business is working to obtain accreditation, ensure financial stability, build a strong relationship with alumni and enrollment growth.”

In the days leading up to his presidential start date, James created and began using the social media hashtags #RestoreMorrisBrown and #TheHardReset to launch the institution’s journey towards regaining its accreditation.

Morris Brown has remained unaccredited since 2002, leaving the institution with roughly 40 enrolled students, according to WABE. James now plans to seek accreditation with the Transnational Association of Christian Colleges and Schools (TRACS). Other priority areas will include significant fundraising efforts.