Miami University in Oxford, Ohio will present the historic Mt. Zion United Methodist Church in Mississippi with the Freedom Summer of ’64 Award to honor the legacy of three Freedom Summer volunteers killed 55 years ago by the Ku Klux Klan.

The Freedom Summer award will be presented at Mt. Zion on June 16 – the anniversary of an arson fire at the church, in which James Chaney, Andrew Goodman and Michael Schwerner left Oxford to investigate. The three men were part of a collective of nearly 800 volunteers trained at Miami University – then known as Western College for Women – who were helping to register Black voters in the south. 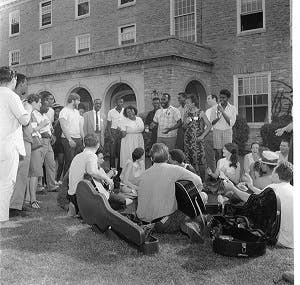 “It’s about not forgetting,” said Ronald Scott, vice president for diversity and inclusion at Miami. “We honor the Mt. Zion United Methodist Church for keeping alive the memory of those who sacrificed to ensure the right to vote, for others’ freedom and for civil rights for all.”

The university honors the legacy of all Freedom Summer volunteers year-round with an outdoor classroom, dedicated artwork and a historic marker. Miami students and community groups have also launched other projects to honor victims of racial violence.