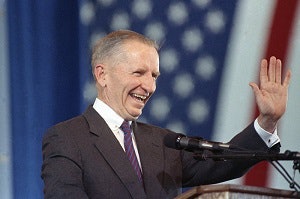 Billionaire businessman and two-time presidential candidate H. Ross Perot has passed away at the age of 89.  The cause of death was leukemia, a family spokesman said Tuesday.

Perot attended the U.S. Naval Academy and became a salesman for IBM. He later founded Electric Data Systems, which helped other companies manage their computer networks. He ran an outsider campaign in the 1992 presidential election against President George H.W. Bush and Democratic challenger Bill Clinton which ultimately garnered 19 percent of the vote. In June of 1992, polls briefly showed Perot leading his major-party rivals, but he dropped out in July, then rejoined the race less than five weeks before the election.

Some Republicans blamed Perot for Bush’s loss to Clinton as Perot won the largest percentage of votes for a third-party candidate since former President Theodore Roosevelt’s 1912 bid.

In his second presidential campaign four years later, Perot won just 8% of the vote, and the Reform Party that he founded began to founder. Nevertheless, Perot’s ideas on trade and deficit reduction remained part of the political landscape.

In Dallas, Perot left his mark by creating the Perot Museum of Nature and Science, helping finance the Morton H. Meyerson Symphony Center, and being a benefactor of The University of Texas Southwestern Medical Center.