When President Donald Trump welcomed the emir of Qatar to Washington with a lavish Treasury Department dinner, the guest list included the president of Georgetown University, one of six U.S. schools that operate branch campuses in the country, according to a report in The Ithaca Journal. 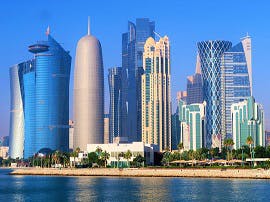 The department alleges the schools didn’t tell federal officials about certain gifts and contracts from foreign sources, as federal law requires, according to letters obtained by the Associated Press.

Investigators are ordering the schools to provide years of information about their foreign revenue, singling out specific nations of interest at each school.

The only two countries that appear in all four letters are China, whose academic ties have become a source of tension amid its trade war with America, and Qatar, an oil-rich nation that has struggled to shake accusations that it finances terrorism.

In a July 3 letter to the American Council on Education, which represents dozens of university presidents, the education department indicated that its broader interest is related to “security, academic freedom and other concerns associated with foreign funding.”