A young man who drowned at Buttermilk Falls State Park near Ithaca, N.Y. has been identified as Binghamton University basketball player Calistus Anyichie, the Burlington Free Press has reported. 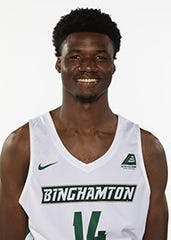 Anyichie, 19, who would have been a sophomore this fall, drowned Sunday, according to a statement from the university. He was a member of the men’s basketball team and was majoring in political science.

Crews responded to the drowning at the 300 block of West King Road at upper Buttermilk Falls State Park at around 5 p.m. Anyichie’s body was found at the base of a 15-foot bank.

Tommy Dempsey, head coach of the Binghamton University men’s basketball team, said in a statement: “There are no words. There is no blueprint for how to deal with such a painful loss. We all loved Calistus so much. He was such a special young man. We are devastated.”

Anyichie lived in Short Hills, N.J., before he started attending Binghamton University. The Nigerian native attended St. Mary-Assumption High School, where he played basketball for three years, was the team captain and was selected all-conference as a senior.

He led the league in blocked shots, helped his team win a division title for three consecutive years, and was recognized as one of state’s top scholar athletes by the New Jersey State Interscholastic Association. He also was a member of National Honor Society.