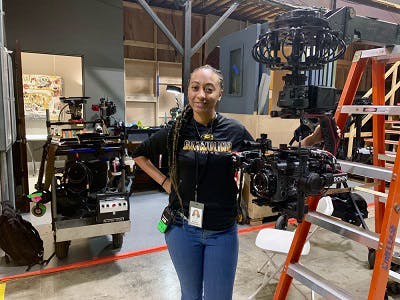 A mass communication student from Grambling State University in Louisiana will intern behind the scenes for Fox’s hit show Empire.

Rising sophomore Kayla Sullers will be a camera intern on Empire’s set for the show’s final season, which will air this fall.

According to the university, Sullers will work with the team that supports some of the main cast, such as Taraji P. Henson and Terrance Howard.

A Chicago native, Sullers is majoring in mass communication with a concentration in integrated media. A student worker for the university’s office of communications, Sullers is also a member of Grambling’s Student Leadership Initiative.

Prior to college, her work as a filmmaker and videographer were recognized by the Museum of Science & Industry Black Art Exhibition and WTTW Chicago Public Media.

“From the time Kayla set foot on campus, she has been shining in the classroom,” said Dr. Robbie Morganfield, head of the mass communication department. “It’s no surprise that she now is positioned to shine beyond it. She is among a cohort of students making phenomenal our new norm, and we’re extremely proud of that.”