John Eastman, a Chapman University law professor who has recently been criticized for his participation in President Trump’s election fraud claims, has agreed to resign, Forbes reported. 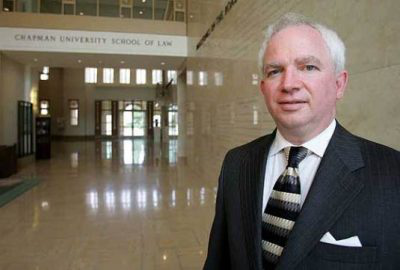 “After discussions over the course of the last week, Dr. John Eastman and Chapman University have reached an agreement pursuant to which he will retire from Chapman, effective immediately,” Chapman President Dr. Daniele Struppa wrote in a statement. “Dr. Eastman’s departure closes this challenging chapter for Chapman and provides the most immediate and certain path forward for both the Chapman community and Dr. Eastman. Chapman and Dr. Eastman have agreed not to engage in legal actions of any kind, including any claim of defamation that may currently exist, as both parties move forward.

“The university is not able to comment further on the specifics of confidential personnel matters and will make no further statements on this matter.”

Criticism and calls for Eastman’s firing mounted as he spoke at a D.C. Trump rally before the violent sieging of the U.S. Capitol.

“We know there was fraud,” Eastman said at the rally. “We know that dead people voted.”

But Struppa had rejected the calls, citing that the school’s manual on faculty conduct prohibits dismissal for such reasons.

Eastman joined the Chapman faculty in 1999 and is currently a visiting scholar at the University of Colorado.