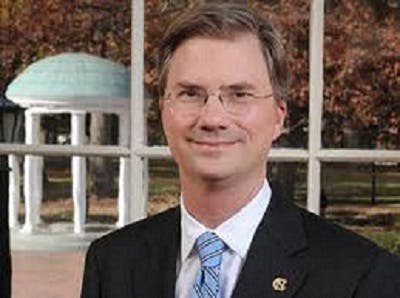 Chancellor Holden Thorp will be a tough act to follow as he is credited with pushing UNC-Chapel Hill into the top 10 of universities in the country in landing federal research money.

CHAPEL HILL, NC  —  A panel that will pare the list of candidates to take over management of North Carolina’s flagship public university got to work Monday with instructions to look globally for a super leader, but to know that about a dozen other prestigious U.S. universities are looking for talent at the same time.

The 21-member committee searching for a new chancellor for the University of North Carolina at Chapel Hill met for the first time in an effort to find a replacement for Holden Thorp by July 1. Thorp said last month he would resign effective in June after dealing with a series of athletic, academic and financial scandals for the past two years. Faculty, employees, students and the campus trustee board asked Thorp to change his mind, but he said his decision was final.

Tom Ross, president of the 17-campus state university system, said the panel should look for candidates living anywhere in the world, and consider those in academia as well as business and other fields. The committee will narrow down the candidates to three finalists who Ross will interview, then recommend one to the university system’s Board of Governors.

“We have lots of blessings and lots of things to be thankful for, but we have our challenges,” Ross said. “All of higher education has its challenges today.”

Recruiters will be competing for leadership candidates along with prestigious universities including Yale, Princeton, Dartmouth, Penn State, Wisconsin and Berkeley, Ross said.

The panel should look for a chancellor who, like Thorp, has “unwavering integrity,” enormous people skills, and a proven ability to persuade donors to contribute to the university generously. Thorp is credited with boosting private donations and pushing UNC-Chapel Hill into the top 10 universities in the country in landing federal research money.

Ross also said the next chancellor should understand that though academics must come first, intercollegiate athletics are central to the college experience and the loyalty it builds with students and neighboring communities, converting them into donors.

Athletics have been at the root of several scandals that plagued Thorp’s tenure, though he has had to shoulder little of the blame. It was revealed that football players accepted gifts from agents, which led to Thorp’s abrupt firing of high-profile coach Butch Davis and NCAA sanctions. Further investigation of the team uncovered players who benefited from no-show courses and instructors who didn’t teach. Last month, the university’s top fundraiser and the mother of former Tar Heels basketball star Tyler Hansbrough, also a fundraiser, resigned after it was revealed they may have used donated money to pay for personal travel.

An auditing firm is conducting a review of possible academic problems involving athletes following revelations of no-show classes in the African and Afro-American Studies Department. The audit will determine whether there are problems deeper than those found in a previous university investigation.

The 21-member search committee is headed by Raleigh attorney Wade Hargrove, who also heads the campus board of trustees, and includes representatives of the school’s faculty, non-teaching employees, students, big donors, athletics boosters, and the nationwide alumni network.