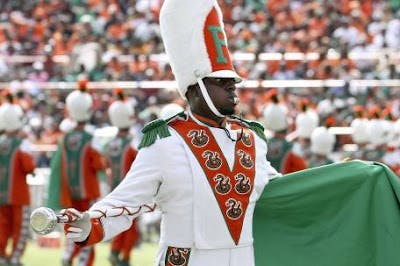 On Monday, the FAMU Student Government Association is holding a remembrance ceremony themed “One Year Later: How We Have Healed and How We Are Moving On.”

When perennial college sports rivals Florida A&M and Bethune-Cookman universities squared off this past weekend for the annual Florida Classic football game in Orlando, there was more on the minds and agendas of the thousands who attended than the usual who would win the game and how well the world famous, now silent FAMU marching band would perform at half-time.

Amid the fun, laughter and camaraderie that bring the thousands of fans to the classic each year was the haunting memory that this weekend was different. Much time was spent remembering that this time a year ago a popular FAMU drum major died at the hands of some of his own band members after the 2011 Classic as they illegally engaged in a hazing encounter that turned really sour and tarnished FAMU’s image in a way from which it will take years to recover.

The game was preceded the day before by a five-hour “anti-bullying, anti-hazing” symposium and workshop open to the public. On game day, just before kick-off at Citrus Stadium, there was the showing of a brief video about bullying and hazing. There was a moment of silence in memory of all victims of bullying and hazing, including Robert Champion, the 26-year-old Atlanta area FAMU drum major whose death triggered the wave of repercussions that shook FAMU to its core.

On today, Monday, the FAMU Student Government Association is set to hold a remembrance ceremony themed “One Year Later: How We Have Healed and How We Are Moving On.”

Indeed, say FAMU officials, admirers and observers, the past 12 months have been a nightmare of sorts for the university. In the aftermath of Champion’s death, the university’s long-time band director and music department chair resigned after challenging his suspension. The 400-member-plus band and related music department groups were suspended. More than 30 FAMU students were charged with hazing-related crimes, including 13 directly related to Champion’s death. Rigid new rules were imposed for future band activities and in-take for all campus organizations. The fallout costs the president Dr. James Ammons his job.

The developments have repeatedly distracted attention from FAMU’s efforts to celebrate its 125th anniversary and tout the numerous honors it has been awarded this year and in the past for academic achievement and leadership. By the same token, the tragic death and its aftermath have thrust FAMU into reforms it may have never pursued otherwise.

“It has heightened our awareness and heightened our sensitivity,” said interim FAMU President Larry Robinson, the FAMU Provost and nuclear scientist picked this summer by the FAMU board of trustees to run the university until a permanent chief executive is found next year.

Robinson offered a shopping list of reforms and new actions the university is taking to address hazing and bullying conduct at the university, actions he and his staff hope will restore public confidence in the university.

Next week, Robinson said in a telephone interview this past weekend, FAMU will begin interviewing candidates for several new posts, including an assistant to the president for anti-hazing issues and a compliance officer who would be specifically assigned to the band to implement and enforce the long list of new conduct and operating rules that will govern the band once it resumes its historic place on the field at half-time of football games.

Robinson said there was no specific time set for the band’s return, noting that hinges on being confident the new staff is in place and ready for work. “I’m looking at the infrastructure,” Robinson said.

Overall, Robinson said, “I could say we’re turning the corner,” hastening to add all the nightmare portion of the Champion death fallout has yet to resolved. For one, the Champion family earlier this month refused a proposed settlement of several hundred thousand dollars in its lawsuit against the university stemming from Robert Champion’s death. Meanwhile trials are still pending for 12 of the 13 students arrested in connection with the hazing death

“It’s certainly not over in terms of the legal elements and trials, but we are working hard” to stay focused on the continuing mission and goals of the university, said Robinson. “We’ve dug very, very deep to put the university in a better place,” he said.

“Hazing is a culture that’s outlived its purpose,” said Mitchell, himself a marching band member several decades ago when he was a FAMU student. “It’s been instructive to us and I hope for others we will never allow ourselves to become complacent. The incidents of the past year have heightened the awareness of us all,” said Mitchell.