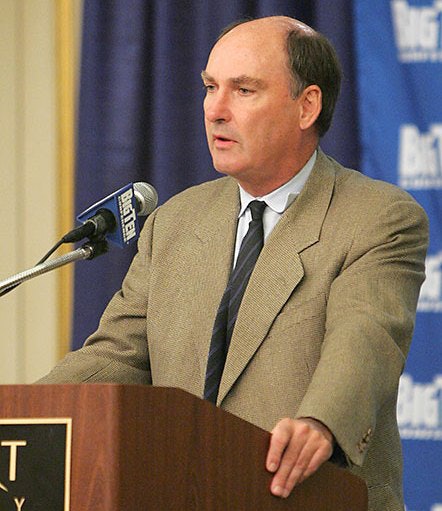 Big Ten Commissioner Jim Delaney says there has been a paradigm shift in college football.

The realignments that have recently unfolded in college football were clearly and somewhat painfully illustrated by the conference commissioners’ panel at last week’s Intercollegiate Athletics Forum (IAF), presented by SportsBusiness Daily/Global/Journal.

A recurring question that arose at last week’s IAF involved whether the top 60 or 70 schools in college football would eventually separate from the NCAA and form a new governing body or possibly seek to establish their own division within the NCAA. The growing chasm building between a few conferences and the rest of Division I athletics was driven home at the panel, Conference Commissioners: Intercollegiate Athletics Change Agents.

Slive said there certainly needs to be an umbrella organization, which brings the value of national championships, legislation, infractions, compliance and adherence.

“How that accommodation is made will be discussed. It can be debated, but at some point, I think it’s going to be very important that Dr. Emmert can be able to find a way to accommodate us in those areas.”

A significant accommodation would involve the full cost of attendance, which would give student-athletes the actual cost of attending in the form of an annual stipend of up to $2,000.

In terms of realignment, Delany explained why the Big Ten felt the need to add teams.

“The paradigm has shifted at all five major conferences outside of their footprint,” he said. “At the end of the day, we thought there was more risk in embracing the status quo than there was in change. So we found two institutions that were in contiguous states. Demographically, they had a lot of advantages.”

No doubt, expansion brings its own risks, but Delany said after monitoring the landscape and assessing the potential outcomes of staying at 12 teams or growing the conference, the Big Ten opted to add the two institutions.

“While we want to respect both the Big East and the ACC and their relationships with them, we’re going to be building friends and relationships over the next couple of years,” Delany said.

“Conferences have traditionally had geographic underpinnings, national rivalries,” Aresco said. “There was a feeling nationally that you had different brands.

“You have platforms now that are broader, so you have ways to monetize product,” he added. “In the end, what I think you need to preserve in college sports is a sense of rivalries because you lost some really good ones. Also, there has to be a cultural fit for institutions. We’re all struggling with that.”

The Big East has traditionally been known as a basketball conference, with such powerhouses as Connecticut, Notre Dame and Louisville. It reinvented itself as a football conference, in large part, because of financial opportunities. The question was posed to Aresco: Will the Big East drop football and become basketball-only? He said a decisive no.

“I think there’s a place for the Big East in football,” he said. “What’s happened to us obviously is not something that we think is good. We’re realists.” Temple has joined the Big East and other schools will join the conference.

Moderator Abraham Madkour, executive editor of SportsBusiness Daily/Global/Journal, asked all three conference commissioners whether basketball has now taken a back seat to football.

“In basketball regular season, none of us are going to argue that it hasn’t changed dramatically over the years,” said Aresco. “The NCAA Tournament means a lot more. That’s affected regular season basketball.”

All three commissioners said every institution engaged in intercollegiate athletics shares the common point of being an institution of higher learning that competes in sports. Delany said he wants to be in the same large tent as Ivy League schools and small colleges because he wants those institutions to have an opportunity to play major college sports, but there has to be flexibility for the upper tier institutions.